Kids Encyclopedia Facts
This page is about the work of the nonprofit organization Sit-in Movement, Inc. For the wave of sit-ins during the 1960s in the United States, see Sit-in movement.

The International Civil Rights Center & Museum (ICRCM) is located in Greensboro, North Carolina, United States. Its building formerly housed the Woolworth's, the site of a non-violent protest in the civil rights movement. Four students from North Carolina Agricultural and Technical State University (NC A&T) started the Greensboro sit-ins at a "whites only" lunch counter on February 1, 1960. The four students were Franklin McCain, Joseph McNeil, Ezell Blair, Jr. (now Jibreel Khazan), and David Richmond. The next day there were twenty students. The aim of the museum's founders is to ensure that history remembers the actions of the A&T Four, those who joined them in the daily Woolworth's sit-ins, and others around the country who took part in sit-ins and in the civil rights movement. The Museum is currently supported by earned admissions and Museum Store revenues. The project also receives donations from private donors as a means of continuing its operations. The museum was founded in 1993 and officially opened its doors just fifty years to the day after the sit-in movements in Greensboro NC.

In 1993, the Woolworth's downtown Greensboro store, which had been open since 1939, closed, and the company announced plans to tear down the building. Greensboro radio station 102 JAMZ (WJMH), began a petition drive to save the location. Morning radio personality Dr. Michael Lynn broadcast in front of the closed store day and night to save the historic building. Eighteen thousand signatures were gathered on a petition. Rev. Jesse Jackson, Jr. visited the location, endorsed the effort, and joined the live broadcast. After three days, the F.W. Woolworth company announced an agreement to maintain the location while financing could be arranged to buy the store. (The Woolworth chain went out of business in 1997, a few years later; the company owning the chain became Venator and is now named Foot Locker.)

County Commissioner Melvin "Skip" Alston and City Councilman Earl Jones proposed buying the site and turning it into a museum. The two founded Sit-in Movement, Inc., a nonprofit organization dedicated to realizing this dream. The group succeeded in purchasing and renovating the property.

In 2001, Sit-in Movement Inc. and NC A&T announced a partnership to facilitate the museum's becoming a reality. 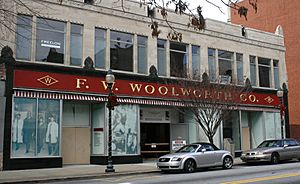 The building in 2008, before opening as the ICRCM 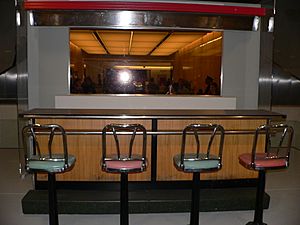 A section of the lunch counter now appears in the display of the Smithsonian Institution National Museum of American History.

The museum project suffered financial difficulties for a number of years, despite millions of dollars in donations. These included more than $1 million from the State of North Carolina, a contribution from the Bryan Foundation, more than $200,000 each from the City of Greensboro and Guilford County, and $148,152 from the U.S. Department of Interior through the National Park Service Agency's Save America's Treasures program in 2005.

In fall 2007, Sit-in Movement, Inc. requested an additional $1.5 million from the City of Greensboro; the request was rejected. Greensboro residents twice voted down bond referenda to provide money for the project.

In 2013, the city agreed to a $1.5 million loan, with the condition that an amount equal to money raised "outside the normal course of business" by the museum from September 2013 to July 2015 would be forgiven. A June 24, 2016 memo from City Manager Jim Westmoreland and Mayor Nancy Vaughn said the museum raised $612,510 and owed $933,155, with the first $145,000 payment due June 30, and the remainder by February 2018. The museum claimed it owed $281,805. On August 1, the city council voted not to forgive $800,000 of the debt; using the museum building as collateral was an option. Two weeks later, the city council gave the museum until February 2018 to raise more money, with an amount equal to money raised to be subtracted from the debt.

As the 50th anniversary of the sit-ins grew closer, efforts increased to complete the project. Over $9 million in donations and grants were raised. In addition, the museum qualified for historic preservation tax credits, which were sold for $14 million. Work on the project proceeded and was completed in time for the 50th-anniversary opening.

The ICRCM opened on February 1, 2010, on the 50th anniversary of the original sit-in, with a ribbon-cutting ceremony. A religious invocation was spoken by Rev. Jesse Jackson, Jr.. The three surviving members of the Greensboro Four (McCain, McNeil, and Khazan) were guests of honor. Assistant Attorney Thomas Perez represented the White House. Speakers included Perez, U.S. Senator Kay Hagan and N.C. Governor Beverly Perdue.

Since 2007 the museum organization has held an annual Black and White Ball. The 2010 theme was "Commemorating Five Decades of Civil Rights Activism." The 2011 theme was "Make a Change, Make a Difference." The 2013 theme was "Celebrating Our Victories as We Honor Our Past."

The museum organization awards an Alston-Jones International Civil and Human Rights Award. The award is given to someone whose life's work has contributed to the expansion of civil and human rights. This is the museum's highest citation. The author Maya Angelou was the winner in 1998.

In October 2016, the museum denied a request by US presidential candidate Donald Trump's campaign to close the museum for five hours for a proposed visit by Trump.

Architect Charles Hartmann designed the building in an art deco style. Completed in 1929, the building in the 100 South block of Elm Street was then known as the Whelan Building because Whelan Drug Co. rented most of the space. Woolworth moved into the site in 1939. The building is part of the Downtown Greensboro Historic District.

The International Civil Rights Center and Museum was designed by Freelon Group of Durham, North Carolina, and exhibits were designed by Eisterhold Associates of Kansas City, Missouri. It has 30,000 square feet (2,800 m2) of exhibit space occupying the ground floor and basement, and office space on the top floor.

Docent-led and self-guided tours are available for a fee. Tours begin in the lower level where visitors are introduced to the segregated society of the 1960s through video presentations and continues with a graphic "Hall of Shame" display of the violence against civil rights protesters of all colors throughout the United States. Visitors are introduced to the four students through a reenactment of the planning session set against the original furniture from their dorm room at A&T College in 1960. Visitors are led into the main floor of the museum where the massive lunch counter, in the original 1960 L-shaped configuration, occupies nearly the whole width and half the length of the building. Original signage from 1960 and dumbwaiters that delivered food from the upstairs kitchen are included, as is a reenactment of the sit-in on life-sized video screens. Visitors are then led through a reproduction of the "Colored Entrance" at the Greensboro Rail Depot where the roles of the church, schools, politics, and courts in the civil rights movement are explored. Artifacts include a pen used to sign the Voting Rights Act of 1965, the uniform of a Tuskegee Airman native to Greensboro, and a complete Ku Klux Klan robe and hood.

All content from Kiddle encyclopedia articles (including the article images and facts) can be freely used under Attribution-ShareAlike license, unless stated otherwise. Cite this article:
International Civil Rights Center and Museum Facts for Kids. Kiddle Encyclopedia.