Iola (pronounced) is a city situated along the Neosho River in the northwestern part of Allen County, located in Southeast Kansas, in the Central United States. As of the 2010 census, the city population was 5,704. Iola is the county seat of Allen County. It is named in honor of Iola Colborn. 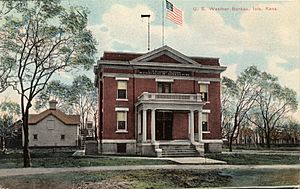 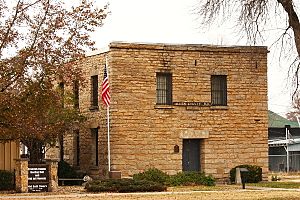 The history of Iola began in 1859. After the location of the county seat at Humboldt, by the legislature of 1858, there was a great deal of dissatisfaction among the residents of the central and northern parts of the county, and a number of citizens selected the present site of Iola, with the intention of ultimately securing the county seat. On January 1, 1859, a large meeting was held at the Deer Creek schoolhouse. It was determined to organize a town company, which was immediately done, and a constitution was then adopted and officers elected. The officers of the company after due consideration of different points selected a site for the proposed town, about two miles (3 km) north of Cofachique, at the confluence of Elm Creek and the Neosho River. The site was owned in part by J.F. Colborn and W.H. Cochrane. The claims on two quarter-sections were bought, and were soon after surveyed into lots.

The town company worked to get the town started. A meeting was held to choose a name. Several were proposed, and the choice was determined by ballot. Some one had proposed the name Iola, which was the Christian name of J.F. Colborn's wife. As a result of the vote, this name was chosen. Meetings of the company were held every week during the first year and efforts made to induce settlement. By the close of the year a number of lots had been disposed of, several buildings erected, and other improvements made, as all who bought lots were required to make some improvements at once. The residents of Cofachique, despairing of making their town a success, joined with Iola, and most of them moved to the new site, all working together in the endeavor to secure the location of the county seat at once.

The first building on the town site was a small log cabin owned by D.B. Bayne. Late in 1859, he built a frame house addition to it. The first building erected after the town was surveyed was a dwelling completed early in June, 1859, by J.F. Colborn, who had lived on the claim of which the town site formed a part, since 1857. On the completion of the house, Colborn and his family moved into it, thus being the first settlers in the town of Iola. The first birth in Iola was that of Luella E. Colborn.

About 1859 a stone building was built to become the town's headquarters in the event of troubles with Indians or Bushwhackers. When the Civil War erupted in 1861, the building and the block on which it stood were fortified, becoming Iola's fort. The fort served both the local militia and Army troops throughout the War.

During 1859, two stores were established by Aaron Case and James Faulkner, who had moved their buildings and goods from the old town of Cofachique, and the first hotel was opened. The post office for the neighborhood had previously been at Cofachique, and Aaron Case was Postmaster, but in October 1859, the office was removed to Iola, Case still being Postmaster, though James Faulkner attended to it, as his deputy, until he was appointed to the office a short time after. In 1860, a number of buildings were erected, and the population increased to about 150. Two more stores were opened—a dry goods store, by D.B. Bayne, and a grocery, by J.M. Cowan.

On March 26, 1860, an election was held on the re-location of the county seat, but the majority of votes were cast to keep the county seat in Humboldt. People were still dissatisfied, and for several years thereafter the county seat question entered largely into every political campaign. Much strife and bitterness of feeling was thus engendered between the two sections of the county, and harsh accusations and recriminations were the order of the day. After a number of years of strife, an election was again ordered, to take place on May 19, 1865. Having secured a majority of the votes, Iola was declared the county seat, and the records and county offices removed there at once, since which time it has remained.

City improvements in 1860 were nearly all made in the spring and early summer. In the latter part of the year the effects of the drought were so badly felt, in addition to failing to secure the county seat, that business became very dull, and for a time all of the citizens were much discouraged. In 1861 the war broke out, and as nearly every able-bodied man in Iola, as well as the county, had entered the army there was no chance for improvement; and until the close of the war, in 1865, the town grew to be no larger than it was in 1860. In 1865, after the return of the citizens from the army at the close of the war, the town began to improve steadily, and so continued until the year 1870, at which time (in March) it was incorporated as a city of the third class (bounded by State Street on the west, Irwin Street on the south, Cottonwood Street on the east, and Brooks Street (now Carpenter Street) on the north), and having secured the Leavenworth, Lawrence and Galveston Railroad, rapid strides were made for the next two years in the improvement of the town. Several manufacturing establishments were in project, and some of them were built.

Among other heavy institutions at that time, was the King Bridge Manufacturing Company, which located the Bridge shops at Iola, in 1871. For some time large numbers of men were employed, and good business was done. But with the monetary panic of 1873, the value of bonds so depreciated that the company failed, and removed its machinery. They received bonds in payment, generally, for their bridges and work, and for this reason the "crash" ruined them. The buildings and several acres of land on which they were located were sold at a Sheriff's sale for $1,100, being purchased by several citizens of Iola. The early journal of the city disappeared during the trouble with the King Iron Bridge Company, relative to the payment of the city bonds voted to that company, which caused some trouble regarding the legality of some of the ordinances and acts said to have been enacted by the first City Council. During the period 1873 to 1876, business in all branches was very poor, and little improvement in the town was made.

The Allen County Courant was the first newspaper published int Iola, and was established January 5, 1867, by W.H. Johnson. On July 27, 1868, Messrs. Talcott & Acers purchased it, and the name of the paper was changed to the Neosho Valley Register. In the following years the ownership of the paper changed five times and it was briefly renamed Kansas State Register between August 24 and December 10, 1870. On January 1, 1875, W.G. Allison & H.W. Perkins took charge and changed the paper's name to the Iola Register. The paper remained Republican under each of these different names and proprietorships.

When the county seat was located at Iola, the town company donated 100 lots to the county, to aid in the construction of public buildings. In July, 1866, bonds were voted to help raise the necessary funds, and not long after a building was purchased from George J. Eldridge, and used for county offices and all court house purposes. In 1877, a new court house, built of stone, was purchased for $1,800, and the old one was sold to the school district to use for a schoolhouse, for $500. The school was kept in two buildings, one the large two-story stone structure erected in 1868, and having an imposing appearance with its twin towers. The other building was a two-story frame, and situated just south of the stone schoolhouse.

An economic boom from natural gas began around 1895 and resulted in a surge in population and industry. In 1910, the population had reached 9,032. 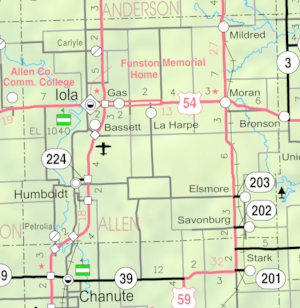 The climate in this area is characterized by hot, humid summers and generally mild to cool winters. According to the Köppen Climate Classification system, Iola has a humid subtropical climate, abbreviated "Cfa" on climate maps.

Iola hosts its annual Farm City Days in mid-October. It's a celebration which involves a parade, and carnival. The purpose of the event is to show appreciation to its farm-town qualities.

There were 2,357 households of which 30.3% had children under the age of 18 living with them, 40.1% were married couples living together, 13.9% had a female householder with no husband present, 6.2% had a male householder with no wife present, and 39.8% were non-families. 33.6% of all households were made up of individuals and 14.6% had someone living alone who was 65 years of age or older. The average household size was 2.28 and the average family size was 2.86.

Allen County Airport is three miles south of the city. Domestic bus and rail service have been discontinued over the years.

All content from Kiddle encyclopedia articles (including the article images and facts) can be freely used under Attribution-ShareAlike license, unless stated otherwise. Cite this article:
Iola, Kansas Facts for Kids. Kiddle Encyclopedia.