Kids Encyclopedia Facts
Not to be confused with Allen, Kansas. 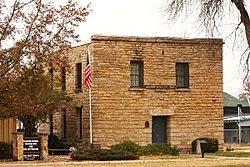 In 1854, the Kansas Territory was organized. Allen County is one of the 33 counties established by the first territorial legislature in August 1855, six years before Kansas statehood in 1861. It was named in honor of William Allen, a United States senator from Ohio. At the time of its creation, Charles Passmore was appointed probate judge; B.W. Cowden and Barnett Owen were appointed county commissioners, and William Godfrey was appointed sheriff. The appointments were temporary until the general election in 1857. The four men were authorized to appoint the county clerk and treasurer thus completing the county organization.

Richard J. Fuqua and his family are considered the first white settlers in the county, arriving in the valley of the Neosho River January 1855. Fuqua established a post for trading with the neighboring Indian tribes which became quite popular with the Sac and Fox Indians. B.W. Cowden and H.D. Parsons arrived in March of the same year and selected claims in the valley of the Neosho River, near the mouth of Elm Creek. The next settlement was made near the mouth of Deer Creek (so named for the abundance of deer in the area) by Major James Parsons, and his two sons, Jesse and James, and a Mr. Duncan. The population grew rapidly through the spring and summer of 1855, most of it located on or near the Neosho River.

Many of the early settlers were pro-slavery, but few slaves were actually brought into the county. The anti-slavery population expressed such antipathy toward their pro-slavery neighbors that slaves within the county there were either freed or taken elsewhere in Kansas by their masters. Immigration continued during the summer and fall of 1856, though in reduced numbers.

The first town and county seat was Cofachique. In the spring of 1855 pro-slavery settlers from Fort Scott laid out the town in a hilly area east of the Neosho River and south of the mouth of Elm Creek. The territorial legislature passed an act in July 1855 incorporating the Cofachique Town Association. It was the only town in Allen County for nearly two years and as such was quite successful; but in 1857 other towns were constructed and Cofachique began to decline almost immediately. One of the reasons for decline was accessibility, the other was a lack of good well water. Another possible contribution to the town's decline involved tensions between the pro and anti-slavery settlers. With the development of neighboring towns Humboldt and Iola the town of Cofachique all but disappeared by 1859. The county seat went briefly to Humboldt in 1857 where it remained until 1865, but with the election of that year Iola took the county seat and has retained this designation to the present.

After a series of disputes between residents in the county over where a county jail should be located, Allen County's first jail was constructed in Iola in 1869 at a cost of $8,400. It operated until a replacement jail house was opened in 1959. Since that time the original jail has been run as a museum.

The last year of the territorial period (1860) was one of the most difficult years since the initial settlement of the county. Periods of drought beginning as early as 1854 had plagued all of Kansas and though 1859 had seen a reprieve, by the end of 1859 and into 1860 the drought worsened. The St. Laurence newspaper reported: "No rain, no snow, and much open, thawing, mild weather, alternated with sharp, though brief [cold] snaps. . . ." Most of the people who had moved to the county in the previous two years were still trying to establish their farms. With the prospect of starvation and hardship before them, many decided to return to the east.

According to the U.S. Census Bureau, the county has a total area of 505 square miles (1,310 km2), of which 500 square miles (1,300 km2) is land and 5.0 square miles (13 km2) (1.0%) is water. Allen County is located in the southeastern part of the state, in the second tier of counties west of Missouri, and about fifty miles north of Oklahoma. In extent it is twenty-one miles from north to south and twenty-four miles from east to west.

The general surface of the country is slightly rolling, though much more level than the greater portion of eastern Kansas. The soil is fertile and highly productive. The bottom lands along the streams average one and one-half miles in width, and comprise one-tenth the area of the county. The remainder is the gently rolling or level upland prairie. The principal varieties of trees native to the county are black walnut, hickory, cottonwood, oak, hackberry and elm. 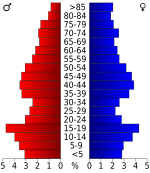 U.S. Route 54 is an east/west route passing through (from east to west) the cities of Moran, La Harpe, Gas, and Iola (the county seat). Outside the county the route connects to Fort Scott in the east and Yates Center and eventually Wichita in the west. Passing through eastern portions of the county and the cities of Mildred and Moran, U.S. Route 59 is one of two north/south routes. It connects to Kincaid and eventually Ottawa and Lawrence in the north and Erie in the south. The other route is U.S. Route 169 which passes through western portions of the county and bypasses to the east of the cities of Iola, Bassett, and Humboldt. It connects to Chanute and eventually Coffeyville in the south. The segment between Iola and Chanute is a freeway with fully controlled access, although there is only one lane in each direction. US-169 provides a direct route for traveling between Kansas City and Tulsa, Oklahoma. 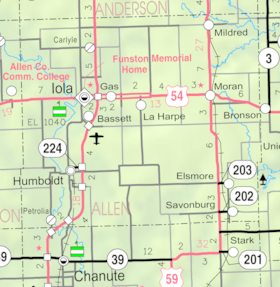 Allen County is divided into twelve townships. Because Humboldt, Iola, and La Harpe are cities of the second class, they are governmentally independent from the townships and are excluded from the census figures for the townships. In the following table, the population center is the largest city (or cities) included in that township's population total, if it is of a significant size.

All content from Kiddle encyclopedia articles (including the article images and facts) can be freely used under Attribution-ShareAlike license, unless stated otherwise. Cite this article:
Allen County, Kansas Facts for Kids. Kiddle Encyclopedia.