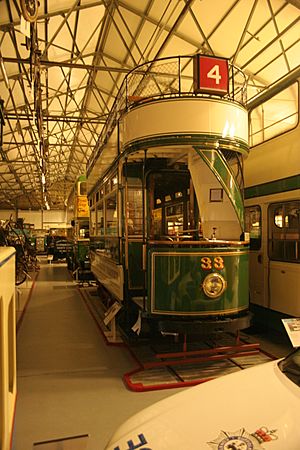 Tramcar 33 (1904) stands next to Ipswich Borough Transport Roe bodied Leyland Atlantean AN68 1/R number 6, view towards back of the museum

The Ipswich Transport Museum is a museum in Ipswich, Suffolk, England, devoted principally to the history of transport and engineering objects made or used in its local area.

The museum collection was started by the Ipswich Transport Preservation Group in 1965. In 1988 it obtained use of its present premises, the old Priory Heath trolleybus depot in Cobham Road, and has been opened to the public since 1995.

Local rail and waterway transport and aviation are represented mainly by photographic collections and smaller exhibits. The Museum also houses an archive and library together with costume and ticket collections.

The Museum is a registered charity, and is normally open to visitors on Sundays (11am to 4pm) from April to November; and on weekday afternoons during school holidays (1pm to 4pm). It also organises occasional events including the annual Ipswich to Felixstowe Run for vintage vehicles on the first Sunday in May, from Christchurch Park, Ipswich to the Promenade in Felixstowe. 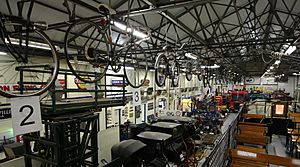 View over part of the main gallery

The collection started 50 years ago with just one bus (an Eastern Counties Dennis Ace), and has grown into a most comprehensive selection of objects. Exhibits include trams, trolleybuses, motorbuses, lorries, fire engines, horse drawn vehicles, bicycles, prams, ambulances, a police car, and even a funeral hearse. The collection is supported by a variety of small exhibits, display material and ephemera.

Restoration of a Co-op horse drawn bread van was completed around 2018, and other ongoing projects at that time included a Dennis Ace bus from 1939 and a Scammell Scarab mechanical horse dating from 1965. The restoration team then turned their attention to a Co-op battery-electric coal truck manufactured by Morrison-Electricar, on which some work had been carried out from 2006. They managed to secure a grant of £7,000 from the Association of Industrial Archaeology in 2018, which would enable them to restore it to working order by refurbishing the motor and control equipment, and purchasing new batteries.

Restoration of a Cambridge horse tram previously with Bath Tramways and then Bradford and Shelf Tramways, was completed in 2019. The car was built in 1880 for the 4 ft (1,219 mm)-gauge Bath Tramways. That system was taken over by the Patent Cable Tramways Corporation in 1884, and was sold again to become part of the standard gauge Bath Electric Tramways in 1902. Car No.6 was sold back to Starbucks, and then to the Bradford and Shelf Tramway around 1886, where it was hauled by steam tram locomotives, until that system closed in 1903 to be replaced by electric trams. At some point the vehicle moved to the Cambridge Street Tramways, probably in 1894, when a Starbuck vehicle became their No.7, and when that system closed in 1914, all eight of the trams were sold at an auction. It became a shed, and was rediscovered in 1988, when the lower deck was being used as a cobbler's workshop in Ely. Faced with the possibility that it might be demolished, it was obtained by the museum, and a seven year restoration began in 2012. Rubbing down of the bodywork revealed its former life in Bradford, while removal of the opening toplight windows revealed handwriting confirming that it had originally been built for Bath. Restoration was assisted by a grant of £49,000 from the Heritage Lottery Fund. The tram was built with a single deck, with an upper deck added at Bradford in the 1880s, but as few details survived, recreating the upper deck was particularly challenging. The vehicle has been restored in the paintwork of Cambridge Street Tramways No. 7.

All content from Kiddle encyclopedia articles (including the article images and facts) can be freely used under Attribution-ShareAlike license, unless stated otherwise. Cite this article:
Ipswich Transport Museum Facts for Kids. Kiddle Encyclopedia.