Island Macaskin or MacAskin (Scottish Gaelic: Eilean MhicAsgain) is an island in Loch Craignish, in the Inner Hebrides of Scotland.

The island was formerly inhabited, and unusually for the Scottish islands, is quite well wooded, with some mature trees scattered about. It appears to have been abandoned in the 1880s, but there is ample evidence of human habitation on it, including a number of walls, a sheep pen, and a lime kiln.

A number of wild flowers grow here, though not as many as on nearby Eilean Rìgh. 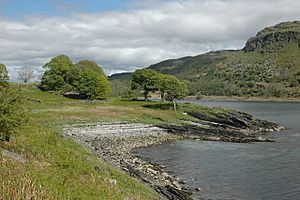 The east coast of Island Macaskin

The island is long and narrow, aligned SW-NE, parallel to the nearby shore of the mainland. It is basically a ridge, with the west being higher than the east. The western side is dominated by the steep sides to the islands central ridge that reaches a height of 65 metres (213 ft). A line of skerries extend from the south of the island into the Sound of Jura.

The geology is metamorphic apidiorite with some Dalriadan quartzite at the south end.

All content from Kiddle encyclopedia articles (including the article images and facts) can be freely used under Attribution-ShareAlike license, unless stated otherwise. Cite this article:
Island Macaskin Facts for Kids. Kiddle Encyclopedia.