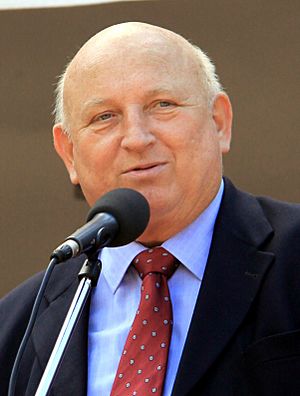 Józef Oleksy (22 June 1946 – 9 January 2015) was a Polish left-wing politician and economist. He served as the seventh Prime Minister of Poland from 7 March 1995 until 7 February 1996. He was also the former chairman of the Democratic Left Alliance (Sojusz Lewicy Demokratycznej, SLD). From 1968 to 1990, he was a member of the communist Polish United Workers' Party.

Oleksy was born in Nowy Sącz, Lesser Poland Voivodeship. He was an atheist before becoming a Roman Catholic.

All content from Kiddle encyclopedia articles (including the article images and facts) can be freely used under Attribution-ShareAlike license, unless stated otherwise. Cite this article:
Józef Oleksy Facts for Kids. Kiddle Encyclopedia.