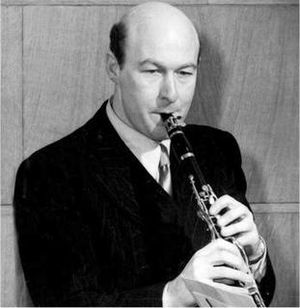 John "Jack" Alexander Brymer OBE (27 January 1915 – 15 September 2003) was an English clarinettist. The Times called him "the leading clarinettist of his generation, perhaps of the century". He was largely self-taught as a player, and he performed as an amateur before being invited by Sir Thomas Beecham to join the Royal Philharmonic Orchestra in 1947. He remained with the orchestra until 1963, two years after Beecham's death.

Brymer later played in the BBC Symphony and London Symphony Orchestras. He was also associated with several chamber music ensembles, and maintained a lifelong pleasure in playing jazz. He held professorships during most of the period from 1950 to 1993, first at the Royal Academy of Music, then at the Royal Military School of Music, and finally at the Guildhall School of Music. He was a frequent broadcaster, both as a player and a presenter, and made recordings of solo works and with orchestras and smaller ensembles. He published two volumes of memoirs and a book about the clarinet.

All content from Kiddle encyclopedia articles (including the article images and facts) can be freely used under Attribution-ShareAlike license, unless stated otherwise. Cite this article:
Jack Brymer Facts for Kids. Kiddle Encyclopedia.