Jack Ingram is an American country music singer. His first single on the U.S. country Top 40 chart was "Wherever You Are". That song hit number 63 on the Billboard Hot 100 chart. Ingram has had six other songs on the country Top 40: "Love You," a cover version of Hinder's "Lips of an Angel," "Measure of a Man," "Maybe She'll Get Lonely," "That's a Man" and "Barefoot and Crazy."

On August 26, 2009, Ingram set a Guinness record for the most radio interviews in one day, when he was interviewed 215 times. 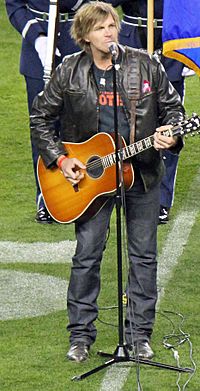 Singing the National Anthem in Denver at Sports Authority Field at Mile High on October 28, 2012

All content from Kiddle encyclopedia articles (including the article images and facts) can be freely used under Attribution-ShareAlike license, unless stated otherwise. Cite this article:
Jack Ingram Facts for Kids. Kiddle Encyclopedia.