Jacky Cheung (born 10 July 1961) is a Hong Kong singer-songwriter and actor. Along with, Aaron Kwok, Andy Lau and Leon Lai, he is one of the Cantopop Four Heavenly Kings. As of May 2003, he has sold more than 25 million records. 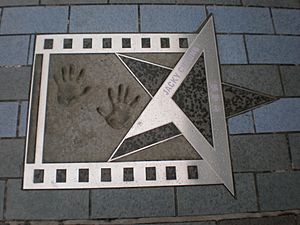 Cheung's hand print an autograph at the Avenue of Stars in Hong Kong.

While Cheung is known for his singing, he has also acted in many films. He received the Best Supporting Actor award as well as the Best Supporting Actor Golden Horse Award. He also received the Best Actor Award at the New Delhi Film Festival. His song Perhaps Love, which serves as the theme song for the multi-award-winning film Perhaps Love, also won the Best Song Award at the 2005 Hong Kong Film Award and the CASH Best Song Award. As of October 2017, he is one of a handful of Chinese singer-actors who have never starred in a television drama.

In December 2006, Cheung performed live the theme song "Together Now" at the Opening Ceremony of the 15th Asian Games in Doha, Qatar. He was introduced as "the most popular Asian performer in the world".

On 15 February 1996 in London, he married Hong Kong actress May Lo Mei-mei, with whom he has two daughters. He is a Buddhist and a vegetarian.

In March 2009 he became the first Cantopop/Mandopop artist to contribute items to the Hard Rock franchise memorabilia collection. Items are to be exhibited at the Hard Rock hotel in Macau. A donation was also made to the Children's Cancer Foundation and ORBIS Macau.

All content from Kiddle encyclopedia articles (including the article images and facts) can be freely used under Attribution-ShareAlike license, unless stated otherwise. Cite this article:
Jacky Cheung Facts for Kids. Kiddle Encyclopedia.