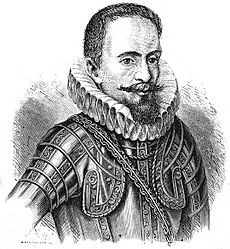 Jacob van Heemskerck was born in Amsterdam in 1567. He is described as having delicate feature, large brown eyes, a thin high nose, fair hair and beard, and a soft gentle expression. Under a quiet exterior and plain dress were a daring nature and indomitable ambition for military and naval distinction. 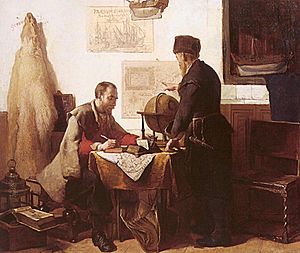 Van Heemskerck's early fame arose from an attempt to discover an Arctic passage from Europe to China. Two vessels sailed from Amsterdam on 10 May 1596, under the command of van Heemskerck and Jan Rijp. Willem Barentsz accompanied Heemskerck as pilot, and Gerrit de Veer, the historian of the voyage, was on board as mate.

The masses of ice in the straits leading to the Kara Sea, and the impenetrable nature of the pack near Novaya Zemlya, had suggested the advisability of avoiding the land and, by keeping a northerly course, of seeking a passage in the open sea. They sailed northwards, and, on 9 June, discovered Bear Island in the Barents Sea. Continuing on the same course they sighted a mountainous snow-covered land in about 80° N., soon afterwards being stopped by the polar pack ice. This important discovery was named Spitsbergen, and was believed—incorrectly—to be a part of Greenland.

Arriving at Bear Island again on 1 July, Rijp parted company, while Heemskerck and Barents proceeded eastward, intending to pass round the northern extreme of Novaya Zemlya. On 26 August, they reached Ice Haven, after rounding the northern extremity of the land. Here their vessel became anchored in ice and they wintered in a house built out of driftwood and planks from the tween decks and the deck-house of the vessel.

On 13 June, they made their way in two open boats to the Lapland coast; but Barents died during the voyage, on 20 June. This was the first time that an arctic winter was successfully faced; The voyage stands in the first rank among the polar enterprises of the 16th century, and led to a flourishing whale and seal fisheries which long enriched the Netherlands.

He later commanded several voyages to the East Indies, setting up trading posts on various islands. On 1 May 1598, Van Heemskerck set out from Texel in a fleet of eight ships bound for the East and returned on 19 May 1600. He sailed out again the following year in a combined fleet of thirteen ships with Admiral Wolphert Harmensz. The fleet split at the Azores with Harmensz going to Mauritius and Van Heemskerck heading straight for the Moluccas.

J. K. J. de Jonge described him as "less of a rough sailor, more of a Drake or a Cavendish, a gentleman adventurer, somewhat proud and lofty, but polished and afraid of naught." When reproached by a factor in Madura for risking the company's property, Van Heemskerck responded, "Where we risk our lives, the gentlemen of the Company must risk their ships and cargoes." He knew how to inspire his men with a blind confidence in himself. When Van Heemskerck was on board the sailors felt safe. A battle they termed a "Heemskerck fight".

Van Heemskerck later served as a vice admiral, protecting Dutch merchant shipping on voyages to China and the Dutch East Indies, participating in the second Dutch expedition to Indonesia. He died as a result of leg wounds caused by a cannonball, during the battle of Gibraltar, an engagement in which a Spanish fleet of 21 vessels was entirely destroyed.

His body was returned to Amsterdam to be buried with full honours in the old Church. His suit of armour—minus a thigh plate shattered by the fatal cannonball—is on display in the Rijksmuseum in Amsterdam.

All content from Kiddle encyclopedia articles (including the article images and facts) can be freely used under Attribution-ShareAlike license, unless stated otherwise. Cite this article:
Jacob van Heemskerck Facts for Kids. Kiddle Encyclopedia.