Oud was born in Purmerend, the son of a tobacco and wine merchant. As a young architect, he was influenced by Berlage, and studied under Theodor Fischer in Munich for a time. He worked together with W.M. Dudok in Leiden, which is where he also met Theo van Doesburg and became involved with the movement De Stijl.

Between 1918 and 1933, Oud became Municipal Housing Architect for Rotterdam. During this period when many laborers were coming to the city, he mostly worked on socially progressive residential projects. This included projects in the areas of Spangen, Kiefhoek and the Witte Dorp. Oud was one of a number of Dutch architects who attempted to reconcile strict, rational, 'scientific' cost-effective construction technique against the psychological needs and aesthetic expectations of the users. His own answer was to practice 'poetic functionalism'. 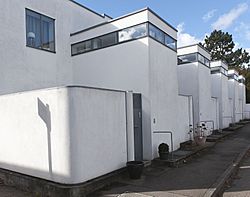 In 1927, he was one of the fifteen architects who contributed to the influential modernist Weissenhof Estate exhibition. In America Oud is perhaps best known for being lauded and adopted by the mainstream modernist movement, then summarily kicked out on stylistic grounds. As of 1932, he was considered one of the four greatest modern architects (along with Ludwig Mies van der Rohe, Walter Gropius and Le Corbusier), and was prominently featured in Philip Johnson's International Style exhibition. Johnson maintained a correspondence with Oud, tried to help him get work, commissioned a house for his mother (never built), and sent him socks and bicycle tires. In 1945, after the end of World War II allowed photographs of Oud's 1941 Shell Headquarters building in The Hague to be published in America, the architectural press sarcastically condemned his use of ornament ("embroidery") as contrary to the spirit of modernism.

After World War II, Oud designed the Dutch National War Monument in Amsterdam and the monument of the Military War Cemetery Grebbeberg. By then, he had mostly let go of any Stijl influences. He continued to take a highly individualistic stance against mainstream modernism. He designed projects such as the Spaarbank in Rotterdam, office-building De Utrecht in Rotterdam and the Children's health-centre in Arnhem (Bio-herstellingsoord). 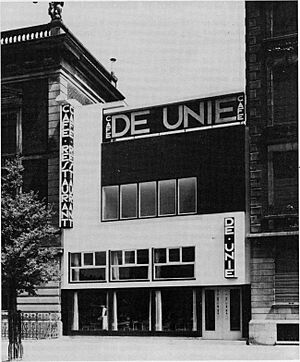 All content from Kiddle encyclopedia articles (including the article images and facts) can be freely used under Attribution-ShareAlike license, unless stated otherwise. Cite this article:
Jacobus Oud Facts for Kids. Kiddle Encyclopedia.