Jacques Houdek (born Željko Houdek; 14 April 1981) is a Croatian recording artist who represented Croatia in the Eurovision Song Contest 2017 with the song "My Friend". Houdek began his professional solo career in 2000 and has since released many recordings and albums out which 13 have been certified silver (5 times), gold, platinum and diamond (once). Houdek is one of the mentors in the Croatian version of the TV talent show "The Voice". During show's first season, he mentored winner Nina Kraljić. Aside from Croatian, he has sung and recorded in English, Italian, German, Spanish, French, Slovene, Macedonian, and Maori language.

Jacques Houdek was born as Željko Houdek on 14 April 1981 in Velika Gorica. His last name is of Czech origin. After finishing elementary music school (piano department), Houdek enrolled in two high schools, music (solo singing department) and vocational hairdressing. He also attended singing lessons with professor Viktorija Badrov who wanted him to become an opera singer. After finishing high schools in 2001 he enrolled in prestigious Berklee College of Music, honing his singing in seminars in France, Greece and Italy. Houdek continued to build up his knowledge on Berklee seminars in Europe, where he had the opportunity to be mentored by Donna McElroy, a Grammy Award nominee.

Houdek held his first solo concert on 19 February 2000 in Zagreb club SAX! where he performed covers of various songs. His first single, the song "Čarolija" (Magic), was released in 2002 and performed by Houdek at the Dora pop festival, Croatia's national competition for entry to the Eurovision Song Contest. There he was noticed by maestro Zdravko Šljivac who offered him a collaboration and publicly praised him by saying that a singer such as Houdek is born once every 300 years. The next month, Houdek signed an exclusive contract with Croatia Records, the leading music publisher in the region, with whom he has produced 13 albums. In 2004, he provided the singing voice of Aladdin for the Croatian dub of the Aladdin franchise, with Dušan Bućan voicing the character for the dialogues.

During campaign for 2007 parliamentary election, Houdek sang party anthem "HDZ zna" (HDZ knows) for the conservative Croatian Democratic Union (HDZ) which was at the time ran by Ivo Sanader. He later also sang for the mayoral campaign of the populist Milan Bandić. Houdek said in an interview for Jutarnji list that he is apolitical and that those were just professional engagements as any other.

In January 2011, Houdek placed 4th in the finals of the Open Mic UK singing contest held in London's O2 Arena. He also participated in the British TV show X Factor, where he was given the nickname "Croatian Sensation" and entered the top 100 candidates. He was unable to continue his participation in the contest because he did not receive a work permit in time.

In February 2017, Houdek was selected to represent Croatia at the Eurovision Song Contest in Kiev, Ukraine. He qualified for the final, achieving 8th place in the second semi-final and eventually 13th place in the grand final with the song "My Friend".

Over the years, he has performed in the Zagreb's Gavella and Comedy theaters, Lincoln Center for the Performing Arts, on the occasion of the tenth anniversary of his career, the Croatian National Theatre in Zagreb, and has sold out solo concert in Vatroslav Lisinski Concert Hall for five times.

TV, concert and other professional achievements 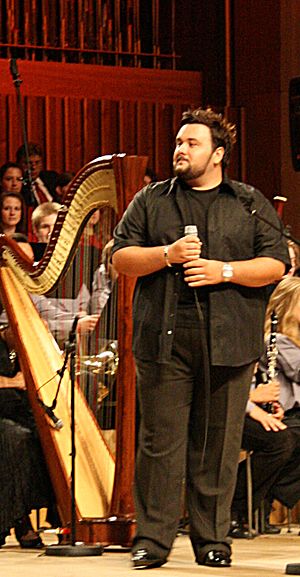 All content from Kiddle encyclopedia articles (including the article images and facts) can be freely used under Attribution-ShareAlike license, unless stated otherwise. Cite this article:
Jacques Houdek Facts for Kids. Kiddle Encyclopedia.