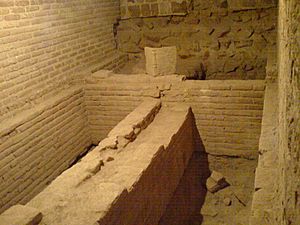 Muzaffar al-Din Jahan Shah ibn Yusuf (died 1467) was the leader of the Kara Koyunlu Turkmen tribal federation in Azerbaijan and Arran. He ruled from about 1438 to 1467. He grew the Kara Koyunlu’s land to its largest. It included Western Anatolia, most of present day Iraq, central Iran, and even Kerman. He was one of the greatest rulers of the Kara Koyunlu. He was said to enjoy drinking and entertainment. During his rule Jahan Shah had the Gökmedrese and Muzafferiye theological schools built in his capital city Tabriz.

All content from Kiddle encyclopedia articles (including the article images and facts) can be freely used under Attribution-ShareAlike license, unless stated otherwise. Cite this article:
Jahan Shah Facts for Kids. Kiddle Encyclopedia.