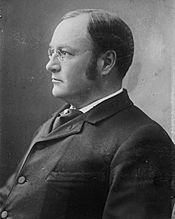 James Schoolcraft Sherman (October 24, 1855 in Utica, New York – October 1912, also in Utica, New York, while in office) was the twenty-seventh Vice president of the United States. He was in office from March 4, 1909 to October 30, 1912. Sherman was a member of the Republican Party, and served with President William Howard Taft.

All content from Kiddle encyclopedia articles (including the article images and facts) can be freely used under Attribution-ShareAlike license, unless stated otherwise. Cite this article:
James S. Sherman Facts for Kids. Kiddle Encyclopedia.