Jan Ferdynand Olszewski (20 August 1930 – 7 February 2019) was a Polish conservative lawyer and politician who served as the Prime Minister of Poland for five months between December 1991 and early June 1992 and later became a leading figure of the national conservative Movement for the Reconstruction of Poland.Olszewski's premiership was the second shortest in the history of the Third Republic.

As a native of Warsaw, Olszewski originated from a working-class family employed in the railway industry, who were strongly connected to the Polish Socialist Party. Olszewski is related to Stefan Aleksander Okrzeja, a Polish socialist nationalist from the turn of the 20th century, who was executed by Russian authorities in 1905 for leading insurgent activities. Despite Olszewski's active preference to right-wing politics later in life, he considered himself sympathetic to socialist causes during his early formative years.

During World War II, Olszewski was active in the Szare Szeregi ("Grey Ranks"), an underground part of the Polish Scouting Association, and participated in the Warsaw Uprising in 1944. 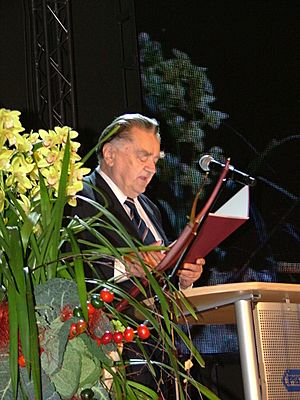 Olszewski remains a controversial figure within Polish politics. Members of the right-wing, particularly Law and Justice leader Jarosław Kaczyński, have praised the former premier for his anti-communist stances and legal principles. On the twentieth anniversary of the Olszewski government's vote of no confidence in 2012, Kaczyński praised Olszewski for attempting to stop the rapid privatizations of the early 1990s, and having helped steer Poland towards its eventual integration into NATO.

In an opinion poll conducted in 2014, asking respondents to evaluate who was the best prime minister of the Third Republic, Olszewski was placed at seventh place. A similar poll conducted by later that year positioned Olszewski at sixth place.

In July 2014, Olszewski was made an honorary citizen of Warsaw by Mayor Hanna Gronkiewicz-Waltz for his participation in the Warsaw Uprising, as well as citing his moral and social authority in service of the city.

All content from Kiddle encyclopedia articles (including the article images and facts) can be freely used under Attribution-ShareAlike license, unless stated otherwise. Cite this article:
Jan Olszewski Facts for Kids. Kiddle Encyclopedia.