Janine Turner (born Janine Gauntt on December 6, 1962) is an American actress, best known for her starring role on General Hospital from 1982 to 1983 and the prime time television show Northern Exposure from 1990 to 1995. She is also known for her role as Dr. Dana Stowe on the 2000-2002 Lifetime original series, Strong Medicine. She is an active author, public speaker, and founder and co-chair of Constituting America 2010.

She was born in Lincoln, Nebraska, and raised in Euless, Texas. At the age of 15, she left home to pursue a modeling career with the Wilhelmina Modeling Agency. She began her acting career in 1980, at the age of 18, in an episode of Dallas. She continued to make guest appearances on popular television shows throughout the 1980s until landing the important role of Maggie O'Connell on Northern Exposure in 1990. She appeared In Music Video Ricochet By David Bowie 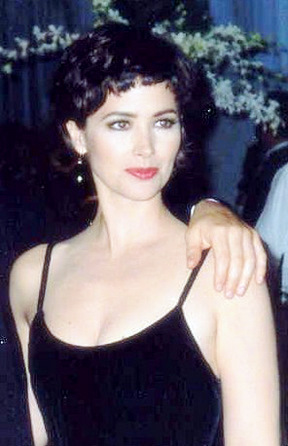 In 1978, the fifteen-year-old Turner left home to pursue a modeling career with the Wilhelmina Modeling Agency in New York City. She began her acting career in 1980 in Hollywood, appearing in several episodes of Dallas. She continued to make guest appearances on television shows throughout the 1980s before landing the role of Laura Templeton on General Hospital.

After her breakthrough in Northern Exposure, she appeared in the big budget action film Cliffhanger starring Sylvester Stallone. In 2004, she wrote and directed Trip in a Summer Dress, a film about a strong-willed mother and her children. She has worked with actor and director Mike Norris in a number of recent projects.

In 2015, Turner portrayed the wife of Anthony Hopkins' character in Solace.

Turner has never married. Her daughter, Juliette Turner-Jones, was born in 1997. Juliette legally hyphenated her surname in 2006 to include the name of her father, Jerry Jones, Jr., son of the Dallas Cowboys' owner. Janine Turner was once engaged to Alec Baldwin and also dated Troy Aikman, Mikhail Baryshnikov, and Sylvester Stallone. She currently lives on a longhorn cattle ranch outside Dallas with her daughter and 21 Longhorns and four Angus cattle.

All content from Kiddle encyclopedia articles (including the article images and facts) can be freely used under Attribution-ShareAlike license, unless stated otherwise. Cite this article:
Janine Turner Facts for Kids. Kiddle Encyclopedia.