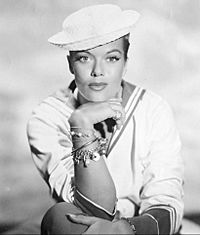 Paige in a publicity photo for I'm Always Jan, 1955

Janis Paige (born September 16, 1922) is an American movie, musical theatre and television actress. She was born in Tacoma, Washington. Her career began in 1944. She retired in 2001. Paige made her live dramatic TV debut June 27, 1957, in "The Latch Key" on Lux Video Theatre.

Paige appeared in many television shows during her career such as 87th Precinct (TV series),The Pat Boone Chevy Showroom, Trapper John, M.D., All in the Family, Columbo and Caroline in the City, and in the 1975 television movie John O'Hara's Gibbsville (also known as The Turning Point of Jim Malloy).

All content from Kiddle encyclopedia articles (including the article images and facts) can be freely used under Attribution-ShareAlike license, unless stated otherwise. Cite this article:
Janis Paige Facts for Kids. Kiddle Encyclopedia.