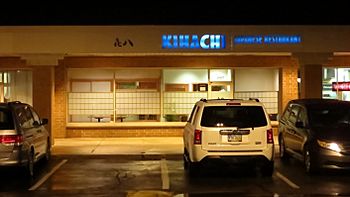 There is a Japanese community in the Columbus, Ohio area.

The presence of Honda Motor Company and related suppliers attracted a population of Japanese expatriates to the Columbus area. In 2011 Bill Daley of the Chicago Tribune stated that "the international pull of Ohio State University" adds to the "real discernible Japanese flavor to" Columbus.

In 2012 Columbus received two cherry trees from the Japanese government and they were scheduled to be planted at the Franklin Park Conservatory and Botanical Gardens on April 27 of that year.

As of the 2010 U.S. Census, 1,071 Japanese people live in Dublin, making up 2.6% of the city's population. As of that year, 122 Japanese live in Union County, making up 0.2% of the county's population. Holly Zachariah of The Columbus Dispatch stated that "It has been that way historically."

Each year the city holds the Asian Festival. Over 100,000 people come to the festival annually. In addition, the Billy Ireland Cartoon Library & Museum at The Ohio State University has the largest collection of manga that is not in Japan.

In 2011 Daley wrote that "The number of Japanese restaurants in and around Columbus ranges from 19 to at least 40, depending on who's counting, and there are dozens more if you tally restaurants under a generic "Asian" theme." Daley stated that Kihachi (㐂八 or 喜八; "㐂" means "喜" or "happy"), a restaurant in Northwest, Columbus, was "so highly regarded" to the point that it was featured in an episode of Anthony Bourdain: No Reservations. In that episode, Anthony Bourdain and Michael Ruhlman visited Kihachi.

The Columbus Japanese Women’s Chorus (はなみずきの会 Hanamizuki no Kai "dogwood group") includes members of the Japanese community. It was founded in 1995. The group name is a reference to the dogwood trees given to Japan by the United States. 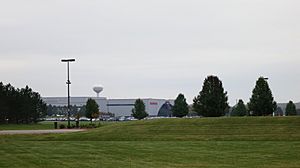 Honda Motor Company operates the Marysville Auto Plant in Marysville and the East Liberty Auto Plant in East Liberty. There are also Honda operations outside of Columbus, including an engine plant near Anna and a transmissions operation in Russells Point. In addition there are suppliers serving Honda in the Columbus area. As of 2011 83 Japanese companies have operations in Greater Columbus.

All content from Kiddle encyclopedia articles (including the article images and facts) can be freely used under Attribution-ShareAlike license, unless stated otherwise. Cite this article:
Japanese community of Columbus, Ohio Facts for Kids. Kiddle Encyclopedia.