Kids Encyclopedia Facts
This page is about the Union County city. For the Mercer County community also known as "Marysville", see Cassella, Ohio.

Marysville's longtime slogan is "Where the Grass is Greener".

In December 2008, Marysville was designated as a "Preserve America Community" by the First Lady Laura Bush.

Marysville was originally part of Northwest Territory, and then became part of the Virginia Military District within that territory, and eventually became part of the state of Ohio. One of the original surveyors of the area was James Galloway, Jr., who first visited in 1805. Marysville was founded in 1819 by Samuel W. Cuthbertson, who named the town after his daughter Mary, along the small waterway of Mill Creek. 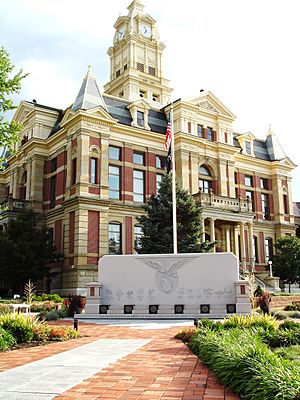 After the organization of the county by the Ohio Legislature, Marysville was designated as the seat of Union County. The first recorded meeting of the commissioners was in 1820. Between 1835 and 1840, a courthouse was constructed. Eventually, a new dedicated courthouse would be built in Marysville on January 27, 1883, which is also presently in use.

In 1849, a county infirmary was authorized. The first county jail was a log structure that sat on the south side of East Center street, in the rear of the courthouse. Eventually a new jail was authorized by the commissioners and built in the 1870s. In 1878 the county purchased a 10-ton safe for the treasury, that eventually was moved into courthouse.

The first county fair was held in 1847 in Marysville, in the public square. In 1852, the Agriculture Society moved the fair to the current location, on the north side of town.

Marysville was originally laid out in 1820. The first permanent settlement was made by Abraham Amrine, of Swiss descent, in 1817, two miles north of the city. Today the main road leading to the high school is named Amrine-Mill Rd. 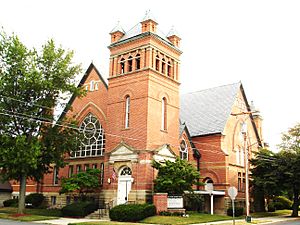 In 1824, the first post office was established. At this time, there were only four families in the village. In 1828, Marysville's first school was established in the east side of town using a log cabin as its building structure. By 1839, there were already three schools operating in the town. In 1843, the first high school was opened by Caroline Humphrey, and by 1850 there was a Board of Education making annual reports to the voters.

In 1837, the Ohio Gazetteer published that Marysville was a small post town consisting of a court house, a jail, forty-five dwelling houses, one tavern, three stores, one practicing physician, two attorneys and about 250 inhabitants. By 1846, Marysville had 360 inhabitants, three small dry goods stores, two churches (Presbyterian and Methodist), a private school, and a newspaper office.

Early Marysville businesses during this period included McClouds Drug Store on the south side of the square, the Cheap Cash Store, the American Hotel, the W.W. Woods store, and Hare and Hughes, a hat business located on the southwest corner of the square. Several locals ran personal unnamed businesses. The village was incorporated in 1840, with Otway Curry elected as the first mayor.

Ladders were first purchased for a fire department in 1845, and by 1865 the village had purchased the first fire engine. The commissioners petitioned for a fire house, but it would not be built until 1906, being a two level brick building. 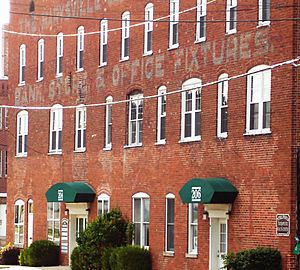 A census in 1859 showed that the village had 981 residents. By 1865, Marysville had six dry goods stores, one hardware store, nine or ten groceries, a mill, a woolen factory, and most of the trades and professions. It was growing steadily by this point.

In 1877, the town council decided to build a city hall on the southeast corner of Main and South. It would be completed in 1878, and house the council rooms, public library, fire department rooms, and city prison. An opera house would be constructed as well. In 1877, a fine building was erected on the eastside of town for education. It had ten rooms for educational purposes, other rooms for various purposes, and an exhibition hall on the upper floor. The Agassiz Scientific, Archaeological and Historical Society of Marysville was organized in 1879, and placed in the East school building, their museum was also placed in the same building.

By 1888, Marysville had earned itself the title of “the Shaded City” because of its tree-lined streets, and by 1890, its population increased to 2,832 residents.

Marysville's industrial roots can be traced back to many early companies. Among those were the Marysville Pearlash Factory, an ashery founded in 1848, which by 1874 was the largest in the United States. The first steam-grist mill was erected in 1856 by Saxton and Casil. In 1867, Miller & Snodgrass constructed a flour mill. In 1874, Marysville Butter Tub and Spoke Company was incorporated with $50,000.

A wool company, Woodbury & Welsh, constructed a factory out of brick in the northeast part of town in 1864, and a brewery was built in 1866 on the east side. In 1868, O.M. Scotts and Company was organized. In 1871, the Marysville Cheese Manufacturing Company was built on the east side. Many carriage manufacturing companies operated in Marysville, including Bauer, Schepper & Devine in 1882, City Carriage Works in 1871, and L. E. Helium in 1874.

In 1875 Rice, Fleck & Co. opened a lumberyard. The Marysville Gas Light Company was incorporated in 1878 following almost a decade of the city using gasoline for lighting. The Bank of Marysville was opened in 1854, the Farmer's Bank of Union County in 1868 located on the southeast corner of the square, and the People's Bank in 1874. 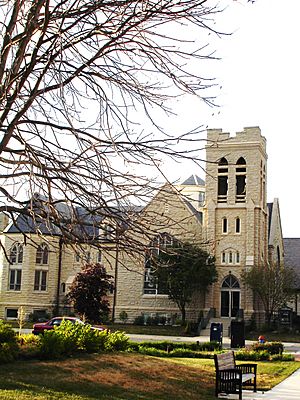 In 1827 the Methodist Episcopal Church was organized. In 1856 the church dedicated a new building on East Center street. The first 4 July celebrations were held in 1828.

In 1840, Otway Curry, a poet of national fame and resident of Marysville, wrote the "Log Cabin Song." It would inspire the Log Cabin Campaign of William Henry Harrison, who would go on to win the Presidential election that year.

The Presbyterian Church was organized in the house of Stephen McClain on September 9, 1829. In 1866, a movement was started to construct a new church building; a new building was finally dedicated in 1870, located at the corner of Center and West Streets. The Congregational Church organized in 1864, with a building constructed on the northeast corner of West and South Street.

The Church of Our Lady of Lourdes, a Roman Catholic Church, was constructed in 1866 at Water Street near the railroad station. The German Lutheran Church organized in 1875, also operating their own school. 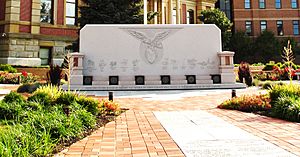 In 1948, Nestlé opened a research and development center in the West neighborhood. A new city hall would be constructed on the southeast side of Uptown, which housed the police department. Memorial Hospital of Union County located in the Medical district in 1952. Many other developments took place during this time, including the construction of the Union County Airport on the east side in 1967, as well as numerous manufacturing companies and small housing developments being constructed throughout the city. Timberview, an upscale residential section on the south side, would be constructed, and included a golf course. Greenwood Colony would also be built on the south side.

In 1977, Honda announced plans to construct a motorcycle assembly plant in Marysville and eventually opened manufacturing plants on the far west side of the town in 1982. This caused the expansion of the U.S. Route 33.

There were 7,314 households of which 41.7% had children under the age of 18 living with them, 53.1% were married couples living together, 11.6% had a female householder with no husband present, 4.4% had a male householder with no wife present, and 31.0% were non-families. 25.2% of all households were made up of individuals and 8.1% had someone living alone who was 65 years of age or older. The average household size was 2.62 and the average family size was 3.16.

The Marysville area is host to a wide variety of parks, fitness, and leisure activities. 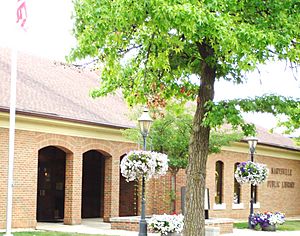 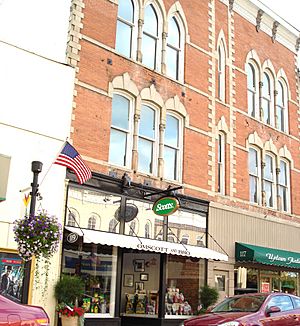 There are numerous parks, totaling over 300 acres (1.2 km2). They include such features as walking and bike nature trails along Mill Creek, with trails at Aldersgate, Eljers, McCarthy, Mill Creek, Mill Valley South and Central, and Shwartzkopf parks. There is an amphitheater at the American Legion park, soccer and baseball fields at Eljer, Lewis, Mill Creek, and Mill Valley South and Central parks, lighted tennis courts at Eljer and Lewis parks, basketball courts at the American Legion and Aldersgate park with lighted courts at Eljer and Lewis parks, and a football field at Lewis park. There is fishing at Aldersgate, McCarthy, Mill Creek, Mill Valley Central, and Shwartzkopf parks. There is a nature preserve at MacIvor Woods. There is a Frisbee golf course, and a skateboard park at Eljer Park.

There are several horse farms and equine centers located in the Marysville area, as are several local golf clubs. The Piatt Castles, Covered Bridges of Union County, and the Big Darby Plains Scenic Byway are a short drive away.

The Scotts Miracle-Gro museum is located just south of the square in Uptown.

The Marysville Public Library is located on Plum Street near Uptown.

Marysville is also host to several local festivals and downtown events throughout the year, such as:

All content from Kiddle encyclopedia articles (including the article images and facts) can be freely used under Attribution-ShareAlike license, unless stated otherwise. Cite this article:
Marysville, Ohio Facts for Kids. Kiddle Encyclopedia.