Jahmarie Wishart Adams (born March 19, 1993), known professionally as Jazz Cartier, is a Canadian rapper, singer, and songwriter. He is best known for his mixtapes, Marauding in Paradise and Hotel Paranoia.

Jahmarie Wishart Adams was born on March 19, 1993 in Toronto, Ontario. His stepfather worked as a diplomat, which made him move around frequently in childhood with his family, living in various times in the United States, Barbados and Kuwait. He credits the different types of music he was exposed to in these locations as all having had an influence on his own style as a hip-hop musician. Cartier spent majority of his high school career at Avon Old Farms, a prestigious all-male boarding school located in Connecticut, and graduated after transferring to another prep school, the Blue Ridge School located in St. George, Virginia. He then spent a postgraduate year at Bridgton Academy in North Bridgton, ME after completing high school.

He was accepted to an art program at Columbia College Chicago in 2012 but, reluctant to move to a new city where he knew no one, he returned to Toronto. 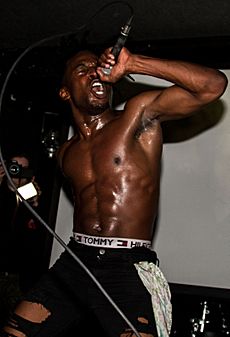 Cartier performing in May 2015

Cartier had worked on an early version of his debut mixtape, Marauding in Paradise, in 2011, but was not satisfied with the tape. After moving back to Toronto, he began working with record producer Lantz and released the song "Set Fire" in 2014. Performing in Toronto-area music venues, he quickly attracted attention — his track "Switch" was regularly played at Toronto Raptors games by team DJ 4Korners, and at a Toronto Red Bull Sound Select show in March 2015 he was introduced by rapper Kardinal Offishall.

Cartier's debut mixtape, Marauding in Paradise, was released on April 15, 2015. The mixtape was supported by three singles: "Switch", "New Religion" and "Dead or Alive".

Cartier's second mixtape, Hotel Paranoia, was released in February 2016 and was supported by the singles: "Stick & Move" and "I Know". On February 23, Cartier was announced as one of the performers at the 2016 Osheaga Festival.

He was a shortlisted nominee for the 2016 SOCAN Songwriting Prize for his track "Dead or Alive". In 2017 he won a Juno Award for his mixtape Hotel Paranoia.

Cartier later announced that his next project following Hotel Paranoia would be titled Fleurever on December 16, 2016. Cartier released the lead single from the album titled, "Tempted" on January 6, 2017. The song peaked at number 91 on the Canadian Hot 100 chart, which became his highest and only charting single to date. Cartier later released the singles "Right Now", "Godflower" and "Which One" as singles from the album in 2018. Fleurever was released on July 27, 2018, and debuted at number 70 on the Canadian Albums Chart.

All content from Kiddle encyclopedia articles (including the article images and facts) can be freely used under Attribution-ShareAlike license, unless stated otherwise. Cite this article:
Jazz Cartier Facts for Kids. Kiddle Encyclopedia.