James Taft "Jimmer" Fredette (born February 25, 1989) is an American professional basketball player for the Shanghai Sharks of the Chinese Basketball Association (CBA). Fredette was the 2011 National Player of the Year in college basketball after ranking as the leading scorer in all of NCAA Division I during his senior season for the BYU Cougars.

He was subsequently selected with the tenth overall pick in the 2011 NBA draft, but only played limited minutes across four different teams over five NBA seasons. He spent the majority of the 2015–16 season in the NBA Development League, during which he won the All-Star Game MVP. In 2016, he joined the CBA's Shanghai Sharks, and during the 2016–17 CBA season, he led the league in scoring, at 37.6 points per game, counting all phases of the season, and won the CBA International MVP award. 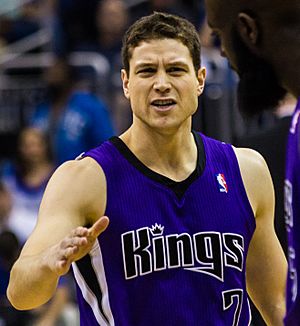 Fredette was born in Glens Falls, New York to parents Al and Kay Fredette, as the youngest of three children. His mother wanted to call him something unique and nicknamed him "Jimmer".

From his early childhood, Fredette showed unusual dedication to athletics. His older brother TJ recalled, "He was the most determined, competitive four-year-old I had ever seen." TJ helped him train for his basketball career since before kindergarten. He regularly played with TJ, seven years older, and TJ's friends on the family's backyard court. Fredette was able to hit three-pointers at age 5, and developed moves to get around his larger opponents. TJ also remembered that his brother "willed himself to find ways to win, even if he was physically outmatched. From the time he was 10, I was telling everybody he was going to make the NBA."

Other family members assisted Fredette in his development. His father, a financial adviser, introduced him to schoolyard competition against adults at age 8. As Fredette developed, his father took him on occasional road trips to Hartford and New York City for more intense competition, and also helped to coach his AAU teams. His mother allowed him to bounce basketballs throughout the house, and even built a dribbling studio for him in their basement. Her brother Lee Taft, a personal trainer who now operates a speed training school in Indianapolis, started him on running drills as a 5-year-old, and still works with Fredette.

Fredette was ranked among the nation's top 75 shooting guards by ESPN.com in high school. He is Glens Falls High School's all-time leading scorer, ranking 16th on New York's all-time scoring list, with 2,404 points. Until February 24, 2015, Fredette held the all-time Section 2 high school record, when he was surpassed by Lake George senior Joel Wincowski. Fredette was named first-team all-state by the New York State Sportswriters Association and the Times Union as a junior and senior.

On August 26, 2011, Fredette announced his engagement to BYU cheerleader Whitney Wonnacott on Twitter. They were married on June 1, 2012, in the Denver LDS Temple. He missed the first playoff game in the CBA playoffs of 2017 because he traveled home to Denver, Colorado, to be with his wife during the birth of their first child. Upon his return he scored 39 points in overtime to give his team the win. While exiting the court he waved to the camera and told his wife and child he was bringing them home a championship.

All content from Kiddle encyclopedia articles (including the article images and facts) can be freely used under Attribution-ShareAlike license, unless stated otherwise. Cite this article:
Jimmer Fredette Facts for Kids. Kiddle Encyclopedia.