Morales was born in Guatemala City, to José Everardo Morales Orellana and Celita Ernestina Cabrera Acevedo. He comes from a circus family, and is an Evangelical Christian. His father was killed in a car accident when he was three years old, prompting him, his mother and three siblings to move to his grandparents' home, where he grew up. By the time he was 10 years old, he and his brother Sammy accompanied their grandfather to sell bananas and used clothing at the market in Santa Lucia.

Morales rose to fame as a TV comedian, starring in the series Moralejas ("Morals") alongside his brother Sammy. He formally changed his name from James Ernesto Morales Cabrera to Jimmy Morales by deed poll in 2011.

Morales has been married for three decades to Hilda Patricia Marroquín, and has three children.

In 2011, he ran as mayoral candidate in Mixco in the Guatemala City suburbs for the small right-wing Action for National Development party. He came in third.

In 2013, Morales joined the small National Convergence Front (FCN/Nation), and became its Secretary-General.

In 2015, Morales was nominated as the FCN's presidential candidate. His priorities were fighting corruption, and dealing with chronic malnutrition, low education levels, and insecurity. His slogan was "Neither corrupt, nor a thief" (Ni corrupto, ni ladrón). He ran on a platform of conservative values, and against corruption. He identifies as a nationalist, supports the death penalty, opposes abortion and legalized drugs, and denies that a genocide against the Ixil Maya took place.

He was initially considered an outsider, but surprisingly led the field in the first round of the election, qualifying for a runoff alongside former First Lady Sandra Torres. Morales' success came after both former vice president Roxana Baldetti and outgoing president Otto Pérez Molina had to step down, and were arrested on fraud and corruption charges (the La Línea corruption case). 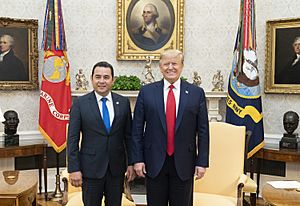 In the runoff, Morales defeated Torres in a landslide, taking 67.4 percent of the vote. Morales' success was viewed as a sign of the distrust of many Guatemalans towards the traditional political elite that ruled the country for decades. Voter anger and military support helped him win the presidency against more experienced politicians who voters felt were tainted by a corrupt political system.

On December 24, 2017, Morales announced that he planned to move the Guatemalan embassy in Israel from Tel Aviv to Jerusalem. He became the second national leader to announce a decision to make such a move, after the President of the United States, Donald Trump, made a similar announcement on December 6.

On June 18, 2018, the Morales government was widely criticized for its slow action in favor of Guatemalans affected by the American policy of separating immigrant families; this caused the dismissal of the presidential spokesman Heinz Heimann who a day before his removal from office said that the government respected the policy of President Trump.

All content from Kiddle encyclopedia articles (including the article images and facts) can be freely used under Attribution-ShareAlike license, unless stated otherwise. Cite this article:
Jimmy Morales Facts for Kids. Kiddle Encyclopedia.