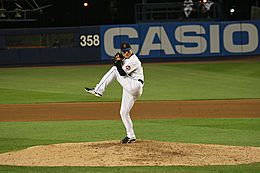 Joseph Smith (born March 22, 1984) is a baseball player who has played for several teams.

He lives in Ohio, with his wife, news reporter and beauty pageant titleholder Alexandra LaForce.

Smith´s horoscope is Aries, the bull.

He is presently a pitcher for the Houston Astros. He previously played for the New York Mets, Cleveland Indians, Los Angeles Angels, Chicago Cubs, and Toronto Blue Jays.

It was in December of 2017 he signed a 2-year contract with the Astros.

Smith first began his career with Brooklyn (A) of the New York–Penn League by allowing two runs, one earned, in one inning of work against the Staten Island Yankees on June 21. He was named one of the top 20 prospects in the New York–Penn League by Baseball America. When Duaner Sánchez was hurt during a taxi cab incident in 2006, Mets general manager Omar Minaya considered recalling Smith to the Majors. But ultimately, the Mets traded for Roberto Hernández and Óliver Pérez to give Smith more time in the minors. On March 24, 2007, after a strong spring training, it was announced Smith would be on the Mets' 25-man roster. On April 1, 2007, Smith made his major league debut. He struck out one (Preston Wilson) and walked one (Albert Pujols). He also gave up a single to David Eckstein. Smith earned his first major league win on April 24, 2007 after coming on in relief in the 12th inning. Smith enjoyed much success in the beginning of 2007, but began to tire and was sent down to the minors at mid year. Smith was with the Mets for all of the 2008 season, enjoying varied success. He went 6–3 in 63.3 innings with an ERA of 3.55.

Smith became a free agent following the 2013 season, but expressed interest in remaining with the Tribe.

On November 24, 2013, Smith reportedly agreed to a three-year contract for $15 million with the Los Angeles Angels of Anaheim, pending the completion of a physical. On November 27, 2013, the Angels confirmed that the team and Smith agreed to the terms. On April 25, 2014, Smith was named the Angels' new closer after multiple struggles by former closer Ernesto Frieri. After the Angels traded for San Diego Padres' All-Star closer Huston Street on July 18, 2014, Smith was moved to an eighth-inning setup role. Smith finished with 15 saves in 76 games to the tune of a 1.81 ERA.

Smith's numbers in 2015 went up as his ERA and WHIP from the previous season. He played uptil June 2016, when he had a hamstring injury.

On August 1, 2016, the Angels traded Smith to the Chicago Cubs for prospect Jesus Castillo. In 16 more appearances with the Cubs to finish 2016, Smith had a 1-1 record and a 2.51 ERA. Overall in 2016, combined with both teams he played for, Smith made 54 total appearances with a 1-4 record and a 3.82 ERA. Smith was a member of the Cubs' 2016 World Series championship team, but did not make any postseason appearances.

On February 9, 2017, Smith signed a one-year, $3 million contract with the Toronto Blue Jays. Smith became the Blue Jays setup man early in the season, after Jason Grilli struggled in the role and Joe Biagini was moved to the starting rotation. He was placed on the 10-day disabled list on June 19 with shoulder inflammation. In 38 games, he was 3-0 with a 3.28 ERA in ​35 2⁄3 innings.

Back to the Cleveland Indians

On December 13, 2017, Smith signed a two-year contract with the Houston Astros worth $15 million. In his first season in Houston, Smith appeared in 56 games, recording a record of 5-1 in ​45 2⁄3 innings with a 3.74 ERA. On December 13 while working out, Smith suffered a ruptured left Achilles tendon. He underwent surgery for it on December 20.

On December 16, 2019, Smith resigned with the Astros on a two-year contract worth $8 million.

All content from Kiddle encyclopedia articles (including the article images and facts) can be freely used under Attribution-ShareAlike license, unless stated otherwise. Cite this article:
Joe Smith (pitcher) Facts for Kids. Kiddle Encyclopedia.