Joe the Plumber facts for kids 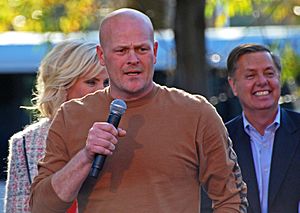 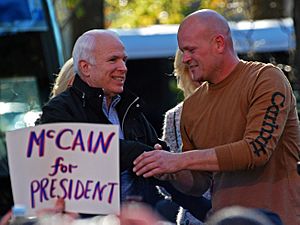 Joe the Plumber with John McCain

Joe the Plumber, nickname of Samuel Joseph "Joe" Wurzelbacher, (born December 3, 1973 in Toledo, Ohio) is an American commentator, motivational speaker and political activist. He has conservative views and is a Republican.

He became well-known during the United States presidential election, 2008 when he asked Democratic presidential candidate Barack Obama in Ohio about his ideas about taxation of small business. Obama reacted by saying that wealth should be spread among the people, which answer the Republicans categorized as being socialist.

Wurzelbacher was intending to start a plumbing business and therefore got the nickname "Joe the Plumber". He became a middle class stereotype in the campaign of the Republican presidential candidate John McCain.

"Joe the Plumber" became a hit in the 2008 presidential elections, often referred to both by McCain and Obama, and being interviewed about all sorts of topics.

In 2012 he tried in vain to be chosen in the United States House of Representatives on behalf of the Ohio's 9th congressional district.

The same year he came with his own news site called JoeForAmerica.com.

Two years after that he started working in a Jeep factory.

All content from Kiddle encyclopedia articles (including the article images and facts) can be freely used under Attribution-ShareAlike license, unless stated otherwise. Cite this article:
Joe the Plumber Facts for Kids. Kiddle Encyclopedia.