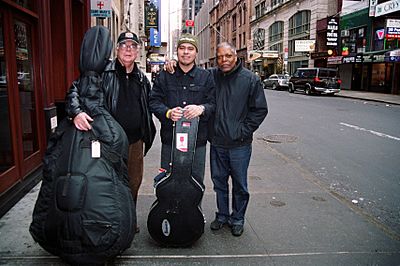 Johnny Alegre (center) with bassist Ron McClure (left) and drummer Billy Hart (right). The photo was taken in New York City when they recorded Johnny Alegre 3 for distribution by MCA.

Alegre studied composition at the University of the Philippines College of Music in the latter 1970s. He was a founding member of the U.P. Jazz Ensemble. He participated in workshops by composer Erhard Karkoschka, guitarist Ike Isaacs, and composer Chou Wen-chung.

The self-titled album Johnny Alegre Affinity was released in the Philippines in mid-2005 by Candid Records Philippines; and was re-released in England the same year by Candid Records (UK) for global distribution as Jazzhound. This was followed by performances at the PizzaExpress Jazz Club in London with guest saxophonist, Dimitri Vassilakis.

During 2006 and 2007, Alegre and Affinity worked on Eastern Skies, an album of original compositions with the Global Studio Orchestra conducted by Gerard Salonga. In 2009 MCA released Johnny Alegre 3, a trio album with Ron McClure (bass) and Billy Hart (drums). Alegre was MCA's first jazz act from the Philippines. In 2014, MCA released a compilation of highlights from Alegre's Candid Records recordings, entitled Stories.

In 2008, Alegre recorded Humanfolk, the name of an album and a band formed with percussionist Susie Ibarra, drummer Roberto Juan Rodriguez, Cynthia Alexander, and Malek Lopez. For Humanfolk he wrote "Para Sa Tao" based on the Baybayin letters of the tagalog language.

Alegre is profiled in the books The Great Jazz Guitarists by Scott Yanow and the Cultural Center of the Philippines Encyclopedia of Philippine Art, Second edition (Volume 7).

Johnny Alegre is the youngest surviving grandchild of the late Sen. Juan Bautista Alegre y Levantino, senator who represented the 6th Senatorial District of the Bicol Region to the 6th and 7th Philippine Legislatures. The family genealogy of Johnny Alegre is descended from Carlist exiles from Spain to the Philippines and intermarried with Filipinos. His paternal grandmother, Amanda ("Aimee") Alegre nee Sargent, is descended from the early Sargent family of New England.

Other than his activities in jazz, World and Philippine music, Alegre was an officer of Wikimedia Philippines, the national chapter of the Wikimedia Foundation in the Philippines; he served as a member of the Board of Trustees, from July 2014 to June 2016, and was the fourth president of the said chapter. As part of his social commitment he was a past president of the Rotary Club of Makati Rockwell of Rotary International District 3830, serving his term in the Rotary Year of 2018-2019, and was conferred a Paul Harris fellowship.

All content from Kiddle encyclopedia articles (including the article images and facts) can be freely used under Attribution-ShareAlike license, unless stated otherwise. Cite this article:
Johnny Alegre Facts for Kids. Kiddle Encyclopedia.