Kids Encyclopedia Facts
This page is about the building in Boston, Massachusetts. For other uses, see Jordan Hall (disambiguation).

Jordan Hall is a 1,051-seat concert hall in Boston, Massachusetts, the principal performance space of the New England Conservatory. It is one block from Boston's Symphony Hall. It is the only conservatory building in the United States to be designated a National Historic Landmark. This building is currently under study by the Boston Landmarks Commission for landmark status.

Its architect was Edmund M. Wheelwright of Boston's Wheelwright & Haven, who later designed nearby Horticultural Hall. The hall's unusual square floor plan reflects its underlying plot of land but despite its shape, the hall has excellent acoustics, and all seats on both the main floor and horseshoe-shaped balcony have unobstructed views of the stage. The hall's prominent organ is modeled upon one found in a church within the former hospital complex of Santa Maria della Scala in Siena. 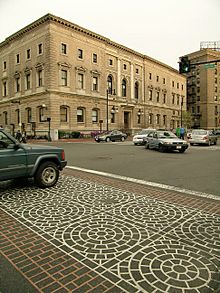 The hall opened in 1903, as a gift of Eben D. Jordan II, a Conservatory trustee and son of the founder of the Jordan Marsh store.

The dedication concert, performed by the Boston Symphony Orchestra, was held October 20, 1903. Newspaper accounts deemed the hall "unequaled the world over," and the Boston Globe reported that it was "a place of entertainment that European musicians who were present that evening say excels in beauty anything of the kind they ever saw." Even a decade later, it describes itself as an "imposing Conservatory Building".

The Hall was restored in 1995 and has since won awards, including the 1996 Massachusetts Historical Commission Preservation Award, the Victorian Society in America's Preservation Commendation, the 1996 Boston Preservation Alliance Award, the Illuminating Engineering Society of North America Award of Merit, and the Illuminating Engineering Society 1996 Lumen Award. The Conservatory's main building, which includes Jordan Hall, was added to the National Register of Historic Places in 1980 and designated a National Historic Landmark in 1994; in both cases the name used is "New England Conservatory of Music."

All content from Kiddle encyclopedia articles (including the article images and facts) can be freely used under Attribution-ShareAlike license, unless stated otherwise. Cite this article:
Jordan Hall Facts for Kids. Kiddle Encyclopedia.