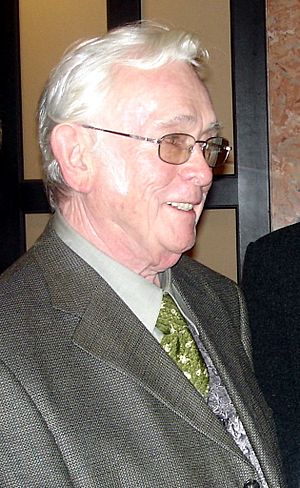 Josef Skvorecky (27 September 1924–3 January 2012) was Czech writer and publisher based in Canada. He left Czechoslovakia after the Soviet invasion in 1968. Skvorecky helped banned Czech writers have their books printed and then smuggled back in to the country.

He was born at Nachod. During World War II he worked in a factory making Messerschmitt airplanes. After the war he studied philosophy at Charles University in Prague. He worked for a government publisher. His job there was to translate books by authors such as Ernest Hemingway, William Faulkner, and Raymond Chandler. He began to write his own detective stories based on a character called Lieutenant Boruvka.

His first novel, The Cowards (1958), was banned because it did not agree with the government about the communist resistance to the Nazis in the war. The book did not talk about heroism and sacrifice. The characters are interested in girls and jazz. He was about to publish his second novel, The Tank Battalion (1968), when the Soviet Union invaded Czechoslovakia in 1968. Skvorecky and his wife left the country and moved to Canada where he had been offered a job at the University of Toronto. With his wife they set up their own publishing company. They reprinted The Tank Battalion. Copies were sold to Czech people living in exile. Some copies were smuggled back into Czechoslovakia. His publishing company specialized in printing books by banned Czech writers.

He was awarded the Order of the White Lion, by Vaclav Havel in 1990, and in 1992 was appointed to the Order of Canada.

All content from Kiddle encyclopedia articles (including the article images and facts) can be freely used under Attribution-ShareAlike license, unless stated otherwise. Cite this article:
Josef Skvorecky Facts for Kids. Kiddle Encyclopedia.