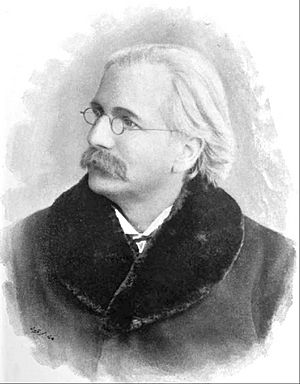 Joseph Parry (21 May 1841 – 17 February 1903) was a Welsh composer and musician. Born in Merthyr Tydfil, Wales, he is best known as the composer of "Myfanwy" and the hymn tune "Aberystwyth", on which the African song "Nkosi Sikelel' iAfrika" is said to be based. Parry was also the first Welshman to compose an opera; his composition, Blodwen, was the first opera in the Welsh language.

Born into a large family, Parry left school to work in the local coal mines when he was nine years of age. He then went to work at the Cyfarthfa Ironworks, where his father was also employed. In 1854 the family emigrated to the United States, settling at Danville, Pennsylvania, where Parry again found employment at an iron works.

Though Parry had a great interest in music, he had no opportunity to study it until there was a temporary closure of the Rough and Ready Iron Works. Some of his co-workers were also musicians, and they offered music lessons while the iron works was closed. Parry joined a music sight-reading class taught by one of the men. He continued to study harmony with another co-worker, and learned how to read and write while he was learning about harmony.

Parry soon began submitting compositions to eisteddfodau in Wales and the United States and winning awards. During a return visit to Wales for the National Eisteddfod at Llandudno, Parry was offered two music scholarships, but was unable to accept due to family obligations. A fund was established for the support of Parry and his family while he studied music.

All content from Kiddle encyclopedia articles (including the article images and facts) can be freely used under Attribution-ShareAlike license, unless stated otherwise. Cite this article:
Joseph Parry Facts for Kids. Kiddle Encyclopedia.