Jowzjan, sometimes spelled as Jawzjan or Jozjan, is one of the thirty-four provinces of Afghanistan, located in the north of the country bordering neighboring Turkmenistan. The province is divided into 11 districts and contains hundreds of villages. It has a population of about 512,100, which is multi-ethnic and mostly agriculture. Sheberghan is the capital of Jozjan province.

More than one quarter of the province is mountainous or semi mountainous terrain, while more than two thirds of the area is made up of flat land. It is one of the provinces known to contain petroleum and natural gas. Mining and agriculture are the main industries.

The province is named after the early medieval region and principality of Juzjan. Between the early 16th century and mid-18th century, the area was ruled by the Khanate of Bukhara. It was conquered by Ahmad Shah Durrani and became part of the Durrani Empire in or about 1750, which formed to the modern state of Afghanistan. The area was untouched by the British during the three Anglo-Afghan wars that were fought in the 19th and 20th centuries.

Following a series of changing allegiances and falling out with Uzbek warlord Abdul Malik Pahlawan in 1997, the Taliban withdrew from the area, but in 1998 a contingent of 8,000 Taliban troops pressed through neighboring Faryab, seizing Abdul Rashid Dostum's headquarters in Sheberghan.

Although it can be regarded as a relatively secured place compared to some other provinces of Afghanistan, there is an increasing number of incidents particularly in Darzab, Qush Tepa and Fayzabad districts. The Mazar-e-Sharif-Sheberghan highway (called Aqyol) has turned into a dangerous traveling route because of militants carrying out attacks against government forces, NGO workers and civilians.

In April 2012 construction of a mega power network with power pylons carrying 500 megawatts of electricity from neighboring Turkmenistan started in the province; the project is supported by Turkmenistan and Turkey. Initial work on the $390 million project had already been completed. Turkmenistan will install power pylons over a distance of 374 kilometres on its soil toward the Afghanistan border and the project will take a year to complete. The network would supply electricity to many areas in Jozjan, Balkh, Sar-e Pol, Faryab and Kabul provinces. 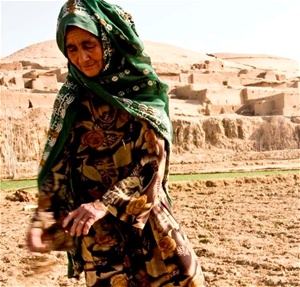 The Governor of the province is Murad Quenili, who replaced Mohammad Aleem Sayee in July 2013. Quenili was previously a senator representing his province Jozjan in the National Assembly of Afghanistan (Afghan Parliament).

All law enforcement activities throughout the province are managed by the Afghan National Police (ANP). The police chief represents the Ministry of the Interior in Kabul. The ANP is backed by other Afghan National Security Forces (ANSF), including the NATO-led forces.

All content from Kiddle encyclopedia articles (including the article images and facts) can be freely used under Attribution-ShareAlike license, unless stated otherwise. Cite this article:
Jowzjan Province Facts for Kids. Kiddle Encyclopedia.