Julie Adams (born Betty Mae Adams; October 17, 1926 – February 3, 2019) was an American actress. She acted mostly from the 1950s to the late 1990s. She did many television series and movies. Adams was born in Waterloo, Iowa. She was raised in Arkansas. She was known for her roles in the 1950s movies Bend of the River and Creature from the Black Lagoon. She was also known for her roles as Paula Denning on Capitol and as Eve Simpson on Murder, She Wrote. 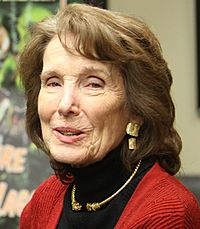 All content from Kiddle encyclopedia articles (including the article images and facts) can be freely used under Attribution-ShareAlike license, unless stated otherwise. Cite this article:
Julie Adams Facts for Kids. Kiddle Encyclopedia.