Kais Saied is the son of Moncef Saied from Béni Khiar (Cap Bon) and Lalla Zakia, a family of modest but intellectual origin. His paternal uncle Hicham Saied was the first pediatric surgeon in Tunisia, known worldwide for separating Siamese twins in the 1970s. 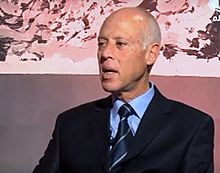 Saied was a professor at the University of Tunis, retiring in 2018. He served as the Secretary-General of the Tunisian Association of Constitutional Law between 1990 and 1995 and has been the vice president of the organization since 1995. Saied also served as Dean of the Law Department at the University of Sousse, as a legal expert for the Arab League and the Arab Institute for Human Rights. Saied was also a member of the expert committee which was invited to offer comments to the draft Constitution of Tunisia in 2014.

Saied was one of the first declared candidates in the 2019 Tunisian presidential election. Running as an Independent social conservative, he has sought to appeal to younger voters. One of his policies included support for allowing citizens to recall their elected officials. Saied suggested to voters that many of Tunisia's current issues were due to "non-respect for many constitutional laws". He presented a plan to combat corruption, whether it is "moral or financial". Saied was supported by both Islamists and leftists.

In a June 2019 interview with the newspaper Acharaâ Al Magharibi, Saied announced his support for the death penalty. He also made statements that homosexuality, or rather its public expression, is financed and encouraged by foreign countries.

Kais Saied is against normalisation of Tunisian–Israeli relationship saying that Israel is in war with the Muslim world and any Muslim leader who normalizes his or her country's relationship with the Zionists should be tried for treason. He said his country has no problem with Jews and that Tunisians including his father protected Jews during the Second World War.

Saied has also stated that he is in favor of a decentralised, three-tier, indirect manner of electing national legislative representatives, some elements of direct democracy, and believes that local representatives should be elected based on character and its underlying structure rather than political ideology. Due to his relative obscurity and lack of campaigning, several of his positions were not well-defined aside from his social conservatism. Despite being supported by Ennahdha in the election and holding socially conservative positions, Saied did not describe himself as an Islamist, and had advisers from across the political spectrum. He also is not in favor of adding religious elements to the constitution, stating that these were only his personal beliefs.

Several media sources referred to Saied as "RoboCop", given his monotonous voice, his use of Standard Arabic rather than Tunisian dialect, and his focus on law and order issues. On the campaign trail, Saied portrayed himself as a man of the people, somewhat similarly to Nabil Karoui, another populist candidate.

Saied received 620,711 votes in the first round of the 2019 Tunisian presidential election, coming in first place, and moved on to face Karoui in the second round. He was announced on 14 October as the new President of Tunisia, winning the second round with 72.71% of the vote. He took office nine days later, becoming only the second president who was not an heir to the legacy of the country's founding president, Habib Bourguiba.

The prime minister will have two months to create a coalition.

Saied was sworn in as Tunisia's president on 23 October 2019. He is the first president born after the country gained independence from France in 1956.

Kais Saied is married to the judge Ichraf Chebil, whom he met when she was a law student in Sousse. They have three children.

He is Grand Master of Tunisians Honorary Orders in his quality of president of the Tunisian Republic.

All content from Kiddle encyclopedia articles (including the article images and facts) can be freely used under Attribution-ShareAlike license, unless stated otherwise. Cite this article:
Kais Saied Facts for Kids. Kiddle Encyclopedia.