Events of the Kanbun era 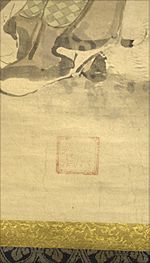 In the 2nd year of Kanbun, the emperor ordered Tosa Hiromichi to change his name to Sumiyoshi Jokei. The seal of the artist is shown here.

All content from Kiddle encyclopedia articles (including the article images and facts) can be freely used under Attribution-ShareAlike license, unless stated otherwise. Cite this article:
Kanbun (era) Facts for Kids. Kiddle Encyclopedia.