Karapiro is a baseload power station, as it is required to maintain water flow in the lower Waikato River even during low inflows to the catchment and during low electricity demand. Only two turbines are required to keep the river flow at a reasonable level, with the third turbine being available for peak generation and during maintenance on either of the other turbines.

Like all of the hydroelectric power stations on the Waikato River, Karapiro is operated by electricity generator Mercury Energy.

Karapiro was the second power station built in the Waikato hydro scheme, after Arapuni. Construction of the dam and power station began in 1940, but a materials and labour shortage due to World War II meant progress was slow. The station was completed in 1947, four years behind schedule.

The creation of Lake Karapiro behind the dam flooded the Horahora Power Station, the first power station built on the Waikato River.

The first generator was commissioned on 10 April 1947, just six days after Horahora was flooded. However, problems with the guide bearing meant full generation didn't start until 21 April 1947. The second generator was commissioned on 21 September 1947. In the first 12 months (to 31 March 1948), the station produced 349,568 megawatt-hours of electricity, just over 20 percent of the North Island's electricity requirements.

The third and final generator was commissioned in May 1948. 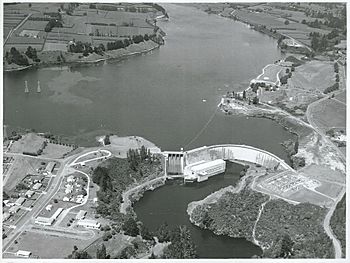 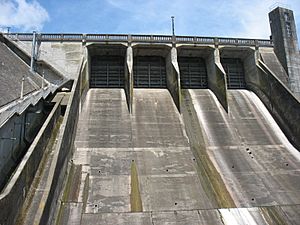 Water from Lake Karapiro runs through the penstocks to three Kaplan turbines. Each turbine turns a generator, outputting 32 megawatts of electricity each at 11,000 volts. Around 3,770 litres (830 imp gal; 1,000 US gal) of water every second is required to run through the turbines to generate 1 MW of electricity.

As part of the power station's construction, a 110,000-volt double-circuit line was built from the station to Hamilton substation. The line was commissioned on 29 March 1947. This line remains in service today as the main connection from Karapiro to the rest of the national grid. In addition, 110,000-volt single-circuit lines connect Karapiro with Te Awamutu and Hinuera substations. All the lines are now owned and operated by national grid operator Transpower.

All content from Kiddle encyclopedia articles (including the article images and facts) can be freely used under Attribution-ShareAlike license, unless stated otherwise. Cite this article:
Karapiro Power Station Facts for Kids. Kiddle Encyclopedia.