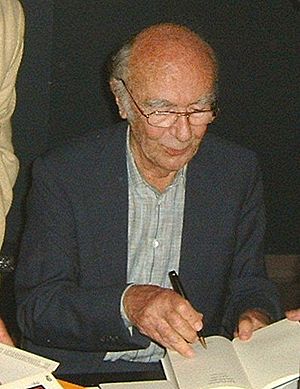 Karl Dedecius (20 May 1921 – 26 February 2016) was a Polish-born German translator. He translated works of Polish and Russian literature. He was born in Łódź, Poland. In 1959, he published his first anthology, Lektion der Stille (Lesson of Silence). In 1980, he founded the German Poland Institute in Darmstadt. He served as director from 1980 through 1997.

All content from Kiddle encyclopedia articles (including the article images and facts) can be freely used under Attribution-ShareAlike license, unless stated otherwise. Cite this article:
Karl Dedecius Facts for Kids. Kiddle Encyclopedia.