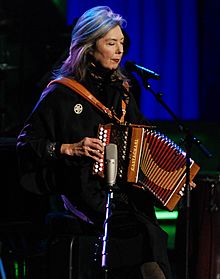 Kate McGarrigle ( February 6, 1946, in Montreal, Canada - January 18, 2010) was a Canadian singer-songwriter famous for her emotional songs written in the folk style. With her sister Anna McGarrigle, she had success in the 1970's where they were well known for their harmony singing. Some of the McGarrigles songs became hits for singers such as Linda Ronstadt and Maria Muldaur. Kate married singer Loudon Wainwright III and had two children, singers Martha Wainwright and Rufus Wainwright.

She died of clear-cell sarcoma in Montreal.

All content from Kiddle encyclopedia articles (including the article images and facts) can be freely used under Attribution-ShareAlike license, unless stated otherwise. Cite this article:
Kate McGarrigle Facts for Kids. Kiddle Encyclopedia.