Outremont is a residential borough (arrondissement) of the city of Montreal, Quebec, Canada. It consists entirely of the former city on the Island of Montreal in southwestern Quebec. The neighbourhood is inhabited largely by francophones, and is home to a Hasidic Jewish community.

A separate city until the 2000 municipal mergers, Outremont is located north of downtown, on the north-western side of Mount Royal – its name means "beyond the mountain" although it encompasses Murray Hill (colline d'Outremont), one of the three peaks that make up Mount Royal. It was named for the house – Outre-Mont – built c. 1830 for Louis-Tancrède Bouthillier, a former Sheriff of Montreal.

The borough is bounded to the northwest by Mount Royal, to the northeast by Villeray–Saint-Michel–Parc-Extension and Rosemont–La Petite-Patrie, to the east by Le Plateau-Mont-Royal and the Mile End district, to the south by Ville-Marie, and to the west by Côte-des-Neiges–Notre-Dame-de-Grâce. The Mount Royal Cemetery is located in the south eastern tip of the borough. 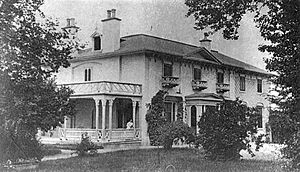 The area was originally known as Côte Sainte-Catherine. It came to be named Outremont after the country residence built by Louis-Tancrède Bouthillier in 1833 that he named Outre-Mont. In 1875, the new Village of Outremont was named after the house, which still exists today on Rue McDougall.

In 1927, Outremont became the first place in the world to use a snow blower to clear its streets in the winter. It was the first production model of Canadian inventor Arthur Sicard's Sicard Industries. 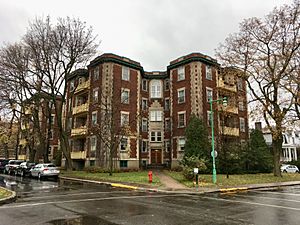 An apartment building on Bernard Avenue in Outremont

Major thoroughfares include Avenue Van Horne and chemin de la Côte-Sainte-Catherine, with avenue Bernard and avenue Laurier as the principal shopping and dining areas. The area has a number of trendy restaurants, cafés and shops. Residents include a substantial percentage of expatriates from France. There is also a sizable Hassidic Jewish community, representing about 20% of Outremont's population, which resides mainly in the eastern and northern portions of the borough. Many Jewish synagogues, schools and businesses can be found on avenues Van Horne, Bernard and St-Viateur.

Among the attractions in the mainly residential community are the Mount Royal Cemetery, the Salle Claude-Champagne, the Théâtre Outremont, the Saint-Grégoire-l'Illuminateur Armenian Cathedral and part of the Université de Montréal campus.

Outremont was twinned as a sister city with Oakwood, Ohio and Le Vésinet, France.

The borough is represented on Montreal City Council by its borough mayor alone. The borough is further divided into four districts, each of which elects one borough councillor.

All content from Kiddle encyclopedia articles (including the article images and facts) can be freely used under Attribution-ShareAlike license, unless stated otherwise. Cite this article:
Outremont, Quebec Facts for Kids. Kiddle Encyclopedia.