Although the cemetery is non-denominational today, it continues to be governed by its original charter with a board of trustees representing the founding Protestant denominations.

The cemetery is a private non-profit organization. Burial rights have always been offered in perpetuity, with the commitment that no graves would ever be reused or abandoned. The founding charter stipulates that all profits should be entirely devoted to the embellishment and improvement of the property.

Mount Royal Cemetery is in operation and even the old portion of the cemetery still has some burial sites available. 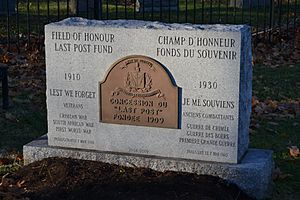 A memorial laid in honour of veterans at the War Graves section of the cemetery.

The first crematory in Canada was built by Sir Andrew Taylor in 1901 on the eastern side of the Mount Royal Cemetery property with funds donated by Sir William Christopher Macdonald, a well-known tobacco tycoon and great philanthropist. This building is the oldest of its kind in the country and it remained the only crematorium in Quebec until 1975. The first cremation took place on April 18, 1902.

Built with Montreal limestone, the original building had a chapel, a room for the cremation chambers, a large winter storage vault and a conservatory filled with exotic plants. In the 1950s, for maintenance reasons, the conservatory was demolished but the original chapel, on the left of the building, is still intact with a beautiful hand made mosaic floor.

The cemetery contains 459 war graves of Commonwealth service personnel, 276 from World War I and 183 from World War II, most of which form two War Plots in Section G. A Cross of Sacrifice stands on the boundary with Notre-Dame-des-Neiges Cemetery.

Military graves at Mount Royal did not take significance until World War I, when Canada lost over 60 000 soldiers. After this event, the population of the city started looking toward public memory more seriously, and gave an entire section to war veterans and fallen soldiers.

A few of the prominent people interred in the cemetery are: 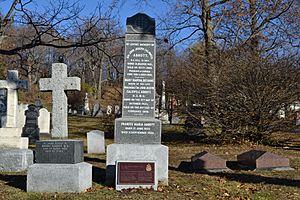 Gravestone for John Abbott, the third Prime Minister of Canada. 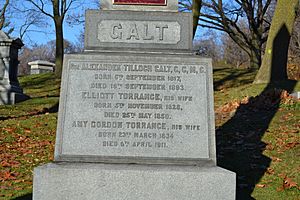 Gravestone of Alexander Tilloch Galt, a Canadian politician, and one of the Fathers of Confederation. 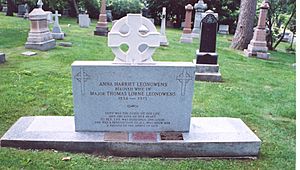 Gravestone for Anna Leonowens, founder of the Nova Scotia College of Art and Design. 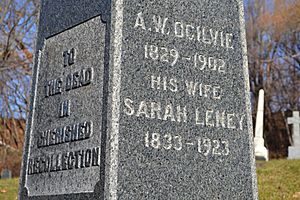 Gravestone for Alexander Walker Ogilvie, along with his wife.

All content from Kiddle encyclopedia articles (including the article images and facts) can be freely used under Attribution-ShareAlike license, unless stated otherwise. Cite this article:
Mount Royal Cemetery Facts for Kids. Kiddle Encyclopedia.