Katy B facts for kids

Kathleen Anne Brien (born 9 May 1989), professionally known as Katy B, is an English singer and songwriter. She released her debut studio album, On a Mission, in 2011, which spawned two top five hits, "Katy on a Mission" and "Lights On". In 2014 she released her second studio album, Little Red, which produced her third top five hit, "Crying for No Reason". She was nominated for the 2011 Mercury Prize. 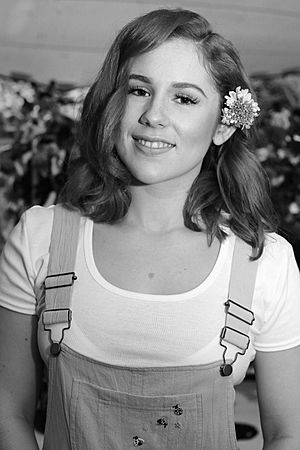 Kathleen Anne Brien was born in Peckham, London, where she attended at Lyndhurst Primary School, Haberdashers' Aske's Hatcham College, and the BRIT School. Katy also attended at the Glenlyn Academy in South London, where she took dance classes. Katy's father (David O'Brien) was a member of the Les Humphries Singers, who represented Germany at Eurovision 1976, with the song "Sing Sang Song".

Katy B possesses a soprano vocal range and has guested on many tracks, both before and during her album release campaign. 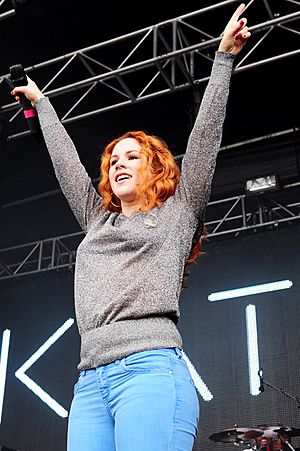 Katy B has received five nominations at the MOBO Awards. She was nominated for Best Push Act at the MTV Europe Music Awards 2011. In 2011 she was also nominated for the Mercury Prize. In 2012 she won a NME Award for Dancefloor Anthem.

All content from Kiddle encyclopedia articles (including the article images and facts) can be freely used under Attribution-ShareAlike license, unless stated otherwise. Cite this article:
Katy B Facts for Kids. Kiddle Encyclopedia.