Kayahan Açar (29 March 1949 – 3 April 2015) was a Turkish pop music singer-songwriter. He was an accomplished composer, consistently ranking among the best-selling Turkish musicians of all time. Kayahan composed all of his own material and released more than eight best-selling albums during a career spanning three decades. Kayahan released a number of compact cassettes, CDs and albums and had major singles. He represented Turkey in Eurovision Song Contest 1990.

Kayahan was born in İzmir. He was married three times and had two daughters. He died from multiple organ dysfunction syndrome due to lung cancer on 3 April 2015 at a hospital in Istanbul. He was laid to rest in Kanlıca Cemetery, which overlooks Bosphorus, following a memorial ceremony in Cemal Reşit Rey Concert Hall, and the religious funeral service at Teşvikiye Mosque, attended also by President Recep Tayyip Erdoğan and a great number of renowned musicians. 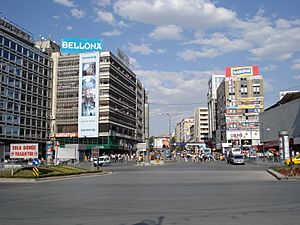 All content from Kiddle encyclopedia articles (including the article images and facts) can be freely used under Attribution-ShareAlike license, unless stated otherwise. Cite this article:
Kayahan Facts for Kids. Kiddle Encyclopedia.