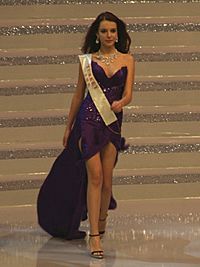 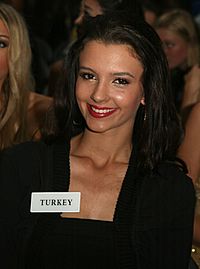 Miss Turkey pageant was initially promoted by the newspaper Cumhuriyet. Since 1980, it has been run by the "Miss Turkey Organization".

Between the years 1980–1990, the contest was sponsored by the newspapers Güneş, Sabah, Tercüman, Bulvar, and some others.

With the establishment of private TV channels in Turkey in 1990, the channels Magic Box, Show TV, Channel D, Star TV, NTV, CNBC-e and FOX TV took over the promotion of the pageant.

The title "Miss Turkey" is a registered trademark.

Note: Not all winners are determined by the current Miss Turkey Organization.

- Miss Top Model of the World

(*) The Miss Universe-delegate during the year 2000, Cansu Dere, was forbidden by the Turkish Government to travel to the 2000 Miss Universe pageant, in Cyprus, unless she could pass through Northern Cyprus, which was then forbidden for any visitor to the Republic of Cyprus. The competition committee in Turkey made arrangements for her to travel through Athens, but the day before her departure the government refused to let her go, "for political reasons". This was the second delegate that was not allowed to represent Turkey that year.

(*) Ahu Ağırbaş who was crowned Miss Turkey/International 2013 did not compete, due to maximum age recruitment.

Big Four and other pageants representatives — under Miss Turkey org.

Miss Turkey sends representatives to the Big Four, the world's four most important beauty contest. Traditionally, the major titleholders of Miss Turkey represent the country at the Miss Universe, Miss World and Miss Supranational and other titles might go to Miss International and Miss Earth pageants.

On some occasions, the winner of Miss Turkey Universe represents her country at the Miss Universe.

On some occasions, the winner of Miss Turkey World represents her country at the Miss World.

All content from Kiddle encyclopedia articles (including the article images and facts) can be freely used under Attribution-ShareAlike license, unless stated otherwise. Cite this article:
Miss Turkey Facts for Kids. Kiddle Encyclopedia.