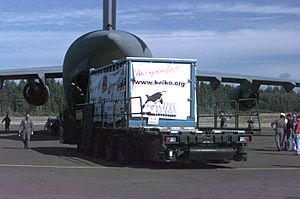 Loading Keiko onto a C-17 transport on September 9, 1998, in Newport, Oregon for transport to the Westman Islands in Iceland

Keiko was captured near Iceland in 1979 and sold to the Icelandic aquarium in Hafnarfjörður. At the time, he was named Siggi, with the name Kago given at a later date. In 1982, the orca was sold to Marineland in Niagara Falls, Ontario, Canada. Keiko was then sold to Reino Aventura, an amusement park in Mexico City in 1985. There, he was given the name "Keiko", a feminine Japanese name that means "lucky one" or "blessed child". He was found by movie scouts at the run-down park and became the star of Free Willy in 1993.

The publicity from his role in the popular film led to an effort by Warner Bros. Studio to find him a better home. Donations from Warner Brothers and Craig McCaw led to the establishment of the Free Willy-Keiko Foundation in February 1995. With donations from the foundation and millions of school children, the Oregon Coast Aquarium in Newport, Oregon was given over $7 million to construct facilities to return him to health with the hope of eventually returning him to the wild. 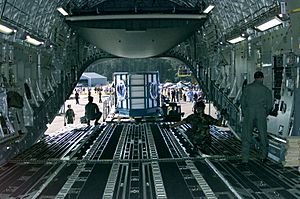 UPS provided ground transportation to the nearby Newport Municipal Airport in a specialized container. Before he left the amusement park in Mexico, Keiko performed for the public for the last time. Weighing about 7,700 pounds (3493 kg), he was transported by air in a C-130 Hercules donated by UPS; during the flight, the orca was in a 30 foot long transfer tank filled with sea water and cooled occasionally with ice cubes.

On arrival in Oregon in 1996, Keiko was housed in a massive, new concrete enclosure containing seawater, his first experience with this medium. His weight had increased significantly by June 1997, to 9,620 pounds (4364 kg).

The plan to return him to the wild was a topic of much controversy. Some felt his years of captivity made such a return impossible. 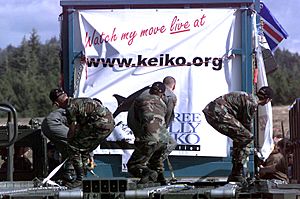 Nevertheless, the process of preparing Keiko for the wild began on September 9, 1998, when he was flown to Klettsvík, a bay on the island of Heimaey in Vestmannaeyjar, Iceland. Upon landing at Vestmannaeyjar Airport, the C-17 Globemaster aircraft suffered a landing gear failure causing over $1 million in damage, though Keiko was unharmed.

His day-to-day care became the responsibility of the Free Willy-Keiko Foundation with management assistance from the Ocean Futures Society. He was initially housed in a pen in the Klettsvik Bay where he underwent training designed to prepare him for his eventual release, including supervised swims in the open ocean.

The Humane Society of the United States re-established management of the project until Keiko's death in 2003. Keiko was fully free by the summer of 2002 and departed Icelandic waters in early August following some killer whales but not integrated with the pod. (His journey was tracked via the signal from a VHF tag attached to the dorsal fin.) About a month later, he arrived in Norway's Skålvik Fjord, apparently seeking contact with human beings and allowing children to ride on his back. His caretakers relocated to Norway and continued to conduct boat-follows with Keiko for the next 15 months. The total cost of freeing Keiko was about US$20 million. 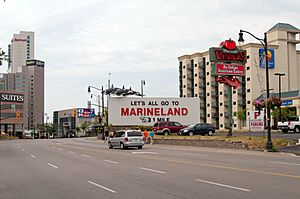 After capture in 1982 Keiko was sold to Marineland in Niagara Falls, Ontario, Canada

Keiko died in Taknes Bay, Norway, while swimming in the fjords on December 12, 2003, at about 27 years of age. Pneumonia was determined as his probable cause of death. Most sources conclude that the project to free Keiko was a failure because the whale failed to adapt to life in the wild. He never integrated into a wild pod and could not break his need for human contact. His return to humans for food and for company confirms the failure of the project.

Reasons cited for Keiko's failure to adapt include his early age at capture, the long history of captivity, prolonged lack of contact with co-species and strong bonds with humans.

All content from Kiddle encyclopedia articles (including the article images and facts) can be freely used under Attribution-ShareAlike license, unless stated otherwise. Cite this article:
Keiko (whale) Facts for Kids. Kiddle Encyclopedia.