Keith Joseph Michell (1 December 1926 – 20 November 2015) was an Australian actor who worked primarily in the United Kingdom, and was best known for his television and film portrayals of King Henry VIII. He appeared extensively in Shakespeare and other classics and musicals in Britain, and was also in several Broadway productions. He was an artistic director of the Chichester Festival Theatre in the 1970s and later had a recurring role on Murder, She Wrote. 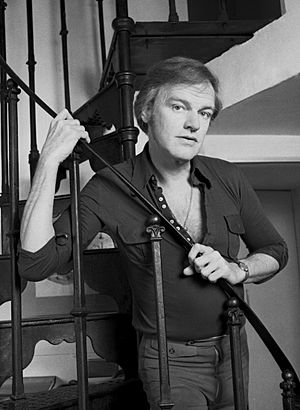 Michell was born in Adelaide, South Australia, and brought up in Warnertown, near Port Pirie. His parents were Joseph, a cabinet-maker, and Alice (née Aslat). He was educated at Port Pirie High School, Adelaide Teachers' College and Adelaide University. He began his career as an art teacher and made his professional acting debut in 1947 in the comedy Lover’s Leap, by Bill Daily, at Adelaide's Playbox Theatre. He then worked in radio for ABC in Adelaide. In 1949, he moved to Britain to study at the Old Vic Theatre School.

He married the actress Jeanette Sterke in 1956, and they had a son and a daughter, Helena, who appeared in the films Prick Up Your Ears and Maurice.

All content from Kiddle encyclopedia articles (including the article images and facts) can be freely used under Attribution-ShareAlike license, unless stated otherwise. Cite this article:
Keith Michell Facts for Kids. Kiddle Encyclopedia.