In this Japanese name, the family name is Fukui.

Fukui was the oldest of three sons of Ryokichi Fukui, who was a merchant. He was born in Nara, Japan.

He graduated from Kyoto Imperial University in 1941.

Fukui worked at the Army Fuel Laboratory of Japan during World War II.{ 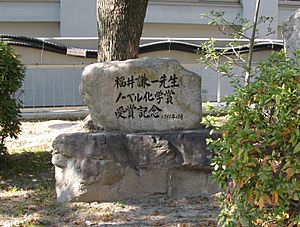 In 1943, he was appointed a lecturer in fuel chemistry at Kyoto Imperial University.

He was professor of physical chemistry at Kyoto University from 1951 to 1982.

He was president of the Kyoto Institute of Technology between 1982 and 1988.

Fukui shared the 1981 Nobel Prize with Roald Hoffmann. Fukui and Hoffmann worked separately on the mechanisms of chemical reactions. Fukui explained in his Nobel lecture that,

"It is only after the remarkable appearance of the brilliant work by Woodward and Hoffmann that I have become fully aware that not only the density distribution but also the nodal property of the particular orbitals have significance in such a wide variety of chemical reactions."

All content from Kiddle encyclopedia articles (including the article images and facts) can be freely used under Attribution-ShareAlike license, unless stated otherwise. Cite this article:
Kenichi Fukui Facts for Kids. Kiddle Encyclopedia.