University of Kentucky facts for kids 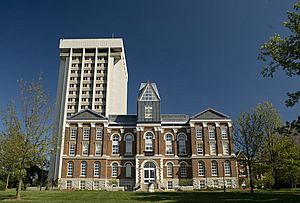 The Main Building and the Patterson Office Tower in the background.

The University of Kentucky sometimes shortened to UK is a public, co-educational university in Lexington, Kentucky. The university has about 27,209 students. It was founded in 1865. The current president of the university is Dr. Eli Capilouto.

The athletics teams of the university are called the Wildcats. They have 19 varsity teams, almost all of which compete in the Southeastern Conference. The men's soccer team plays in Conference USA, and the rifle team competes in the Great America Rifle Conference.

In the 2014-15 season of the men's basketball team, the team won all 31 regular season games and started 38-0. However, they were upset by Wisconsin in the final four, who they played also the year before. They would finish 38-1.

All content from Kiddle encyclopedia articles (including the article images and facts) can be freely used under Attribution-ShareAlike license, unless stated otherwise. Cite this article:
University of Kentucky Facts for Kids. Kiddle Encyclopedia.