Khadijah bint Khuwaylid or Khadija bint Khuwaylid (555 or 567 CE – 22 November 619 CE) was the first wife and first follower of the Islamic prophet Muhammad. Khadijah was the daughter of Khuwaylid ibn Asad, a leader of Quraysh tribe in Mecca, and a successful businesswoman in her own right.

Khadijah is often referred to by Muslims as "Mother of the Believers", as are other wives of Muhammad. She is one of the most important female figures in Islam, along with her daughter, Fatimah. 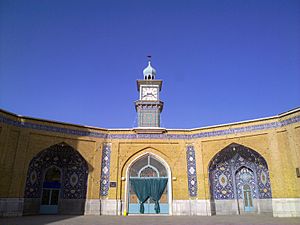 Khadijah's father, Khuwaylid ibn Asad, was a merchant and leader. According to some traditions, he died c.585 CE in the Sacrilegious War, but according to others, he was still alive when Khadijah married Muhammad in 595. His sister, Umm Habib bint Asad, was the matrilineal great-grandmother of Muhammad. Khadijah's mother, Fatima bint Za'idah, who died around 575 CE, was a member of the Amir ibn Luayy clan of the Quraysh and a third cousin of Muhammad's mother.

Khadijah became a very successful merchant. It is said that when the Quraysh's trade caravan travellers|caravan]]s gathered to embark upon their summer journey to Syria or winter journey to Yemen, Khadijah's caravan equalled the caravans of all other traders of the Quraysh put together. It is said that she fed and clothed the poor and assisted her relatives financially and provided for poor relations.

Khadijah entrusted a friend named Nafisa to approach Muhammad and ask if he would consider marrying. When Muhammad hesitated because he had no money to support a wife, Nafisa asked if he would consider marriage to a woman who had the means to provide for herself. Muhammad agreed to meet with Khadijah, and after this meeting they consulted their respective uncles. The uncles agreed to the marriage, and Muhammad's uncles accompanied him to make a formal proposal to Khadijah. Khadijah's uncle accepted the proposal, and the marriage took place. At the time of the marriage Muhammad was 25 years old and Khadijah was 40 years old. Muhammad and Khadijah were married monogamously for 25 years. After her death, Muhammad took other wives.

The number of children she bore before and to Muhammad is disputed, but it is generally agreed that they had six to eight children together;

Khadijah was supportive of Muhammad's prophetic mission, always helping in his work, proclaiming his message and belittling any opposition to his prophecies. It was her encouragement that helped Muhammad believe in his mission and spread Islam. Khadijah also invested her wealth in the mission. When the polytheists and aristocrats of the Quraysh harassed the Muslims, she used her money to feed the Muslim community. 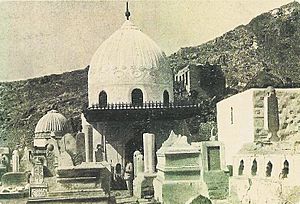 Mausoleum Khadijah, Jannatul Mualla cemetery, in Mecca, before its destruction by Saud

Khadijah died in "Ramadan of the year 10 after the Prophethood", i.e., in April or May 620 CE. Muhammad later called this tenth year "the Year of Sorrow", as his uncle and protector Abu Talib also died at this time. Khadijah is said to have been about 65 years old at the time of her death. She was buried in Jannat al-Mu'alla cemetery, in Mecca, Saudi Arabia.

In the years immediately following Khadijah's death, Muhammad faced persecution from opponents of his message and also from some who originally followed him but had now turned back. Hostile tribes ridiculed and stoned him. Muhammad migrated to Yathrib (Medina) after Khadijah's death.

All content from Kiddle encyclopedia articles (including the article images and facts) can be freely used under Attribution-ShareAlike license, unless stated otherwise. Cite this article:
Khadijah bint Khuwaylid Facts for Kids. Kiddle Encyclopedia.