Khat is a flowering plant native to tropical East Africa and the Arabian Peninsula. It is also known as qat, qaat, quat, gat, jaad, chat, chad, chaad and miraa. The plant is grown commercially in Kenya, Oman, Yemen and Ethiopia. Khat is a shrub. When grown commercially, the shrubs grow to a size of about 5m, in the wild they can reach about 20m. 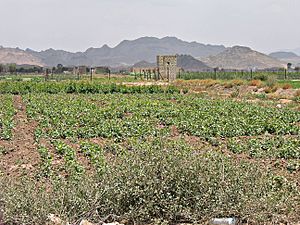 Khat has been grown for use as a stimulant for centuries in the Horn of Africa and the Arabian Peninsula. In Uganda it is grown in the central region and in some parts of the western region of the country. In Kenya it is grown in Meru County. Chewing khat predates the use of coffee and is used in a similar social context, the effects are comparable to those of drinking tea or coffee. Its fresh leaves and tops are chewed or dried and consumed as tea. The leaves or the soft part of the stem can be chewed with either chewing gum or fried peanuts to make it easier to chew.

Although the practice of khat-chewing is still primarily restricted to its original area of cultivation in the Red Sea area, the khat plant has over the years found its way to Southern Africa as well as tropical areas, where it grows on rocky outcrops and in woodlands. In recent years improved roads and air transportation have increased the global distribution of this perishable commodity. 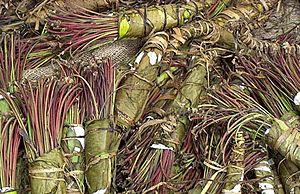 Bundles of khat, seized by the DEA

It is a controlled substance in some countries, such as Canada, Germany, the United Kingdom, and the United States, while its production, sale, and consumption are legal in other nations. The plant has been targeted by anti-drug organizations such as the DEA. 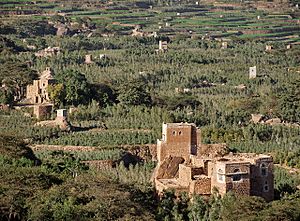 Khat is very popular in Yemen. It takes seven to eight years for the khat plant to reach its full height. Other than access to sun and water, khat requires little maintenance. Much of the country's farming resources go towards it. It is estimated that 40% of the country's water supply goes towards irrigating it.

Its production is said to increase by about 10% to 15% every year. Water use in producing khat is so high that groundwater levels in the Sanaa basin are getting lower. For this reason, government officials have proposed to move large portions of the population of Sanaa to the coast of the Red Sea.

One of the main reasons Yemen produces so much khat is because the price brings in a high income for farmers. It is estimated that between 1970 and 2000, the area on which khat was cultivated grew from 8,000 hectares to 103,000 hectares. In 2000, according to a World Bank estimate, khat accounted for 30% of Yemen’s economy.

All content from Kiddle encyclopedia articles (including the article images and facts) can be freely used under Attribution-ShareAlike license, unless stated otherwise. Cite this article:
Khat Facts for Kids. Kiddle Encyclopedia.