Kilfane Church is a medieval church and National Monument in County Kilkenny, Ireland. 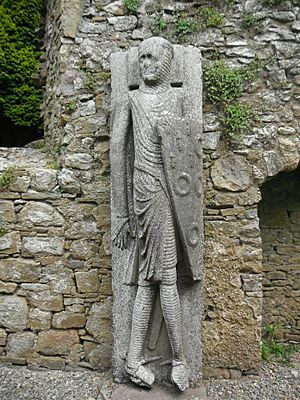 The area is supposed to derive its name from a Saint Phian.

The church was built in the 13th century. The Cantwells were Lords of Kilfane and adjoining areas from shortly after the Norman conquest to the confiscations following the Confederation.

Poet Deirdre Brennan wrote a poem about Kilfane Church in 2001. 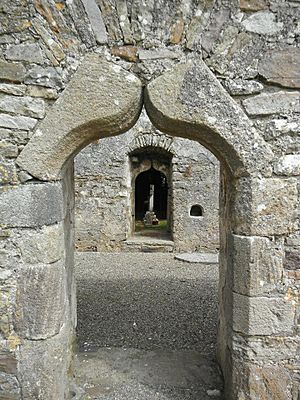 Kilfane Church is a long rectangle with sedilia, altar, book rest and piscina. The sedilia is believed to come from an older church and still has some medieval paint. Three original doorways in the north and south walls are headed by ogee stones.

The castellated bell tower at the east end may have housed the presbytery/sacristy and provided residents in the upper storeys.

The main feature is the Cantwell Fada, an effigy of a knight from the 1320s/30s; this would have been intended to lie horizontally as a cover to his tomb, but is now set vertically.

All content from Kiddle encyclopedia articles (including the article images and facts) can be freely used under Attribution-ShareAlike license, unless stated otherwise. Cite this article:
Kilfane Church Facts for Kids. Kiddle Encyclopedia.