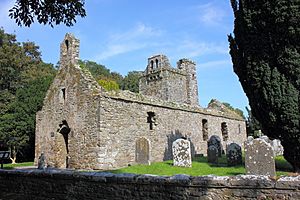 Kilfane (Irish: Cill Pháin) is a combination of two townlands located outside of Thomastown in County Kilkenny, Ireland. It is made up of the townlands of Kilfane East and West with a total area of 75 acres (0.30 km2). Located in the barony of Gowran, Kilfane gives its name to the wider civil parish which contains 16 townlands. It is in the Roman Catholic parish of Tullaherin.

This is also the site of the 13th-century Kilfane Church, now in ruins, which has an adjoining castellated presbytery or stone house. There are traces of the original consecration crosses to be seen, the ogee headed doorways, remains of the altar, sedilia and book rest. Inside the ruined church on the North Wall is the effigy of a Norman Knight in full armour. It is referred to as Cantwell Fada and this effigy is the tallest of its kind in Britain or Ireland.

All content from Kiddle encyclopedia articles (including the article images and facts) can be freely used under Attribution-ShareAlike license, unless stated otherwise. Cite this article:
Kilfane Facts for Kids. Kiddle Encyclopedia.