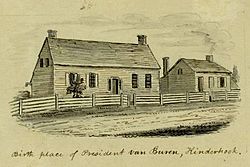 Kinderhook (Kinderhoek in Dutch) is a village located in the town of Kinderhook in Columbia County, New York, United States. The village population was 1,211 at the 2010 census.

The village of Kinderhook is located in the south-central part of the town on US 9.

The area was named by Henry Hudson in 1609 as Kinderhoek (Dutch for "children's corner") because he had seen Native American children frequently playing there. First settled by the Dutch around 1640, the area was surrendered to the English in 1664.

In 1686 the area was granted the Great Kinderhook Patent and organized into one township.

Much of the area's growth did not occur until the 19th century - in 1813 the village had only twenty dwellings. By 1843, the number had grown to 86, and just seven years later there were about 200 buildings and 1,400 inhabitants. The size of the village has remained steady since then, and the Kinderhook Village District has been listed on the National Register of Historic Places since 1974. In 1838, Kinderhook was chartered as a village.

United States President Martin Van Buren was born in Kinderhook village, and was known as "Old Kinderhook", which was sometimes abbreviated as "O.K." Thus some sources attribute the use of the phrase "OK" to Van Buren and his supporters. The home where he was born, his father's tavern, no longer exists, but a historical marker is located on the site. south of the village and is open to the public.

According to the United States Census Bureau, the village has a total area of 2.1 square miles (5.4 km2). None of the area is covered with water. Kinderhook Creek, a tributary of the Hudson River, forms the southeast boundary of the village.

There were 546 households out of which 29.5% had children under the age of 18 living with them, 56.4% were married couples living together, 6.8% had a female householder with no husband present, and 33.7% were non-families. 29.9% of all households were made up of individuals and 13.2% had someone living alone who was 65 years of age or older. The average household size was 2.34 and the average family size was 2.91.

All content from Kiddle encyclopedia articles (including the article images and facts) can be freely used under Attribution-ShareAlike license, unless stated otherwise. Cite this article:
Kinderhook (village), New York Facts for Kids. Kiddle Encyclopedia.