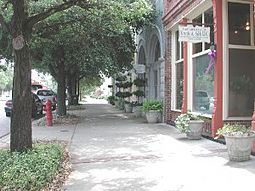 Kingstree is a city and the county seat of Williamsburg County, South Carolina, United States. The population was 3,328 at the 2010 census.

The original town was laid out as Williamsburg by the Lords Proprietors in colonial times. But a lone, unusually large white pine was found along the Black River. Since tall white pines were ideal for use as masts for ships, it was claimed by the Crown on behalf of the king. The broad arrow mark was carved into the tree to prevent any colonists from cutting it. Though white pines are native to the Appalachians as far south as Georgia, it is the only tree of King George’s ever found in the South. Over time, the county kept the name Williamsburg, but the county seat became known as The King's Tree, giving rise to its modern name.

Battle of the Lower Bridge

General Francis Marion, known as the Swamp Fox, defeated the British at the Battle of the Lower Bridge in March 1781. There is a historical marker to mark the battle between US Highway 521 and the Black River.

After the British had destroyed Charles Town during the revolution, General Marion gained supporters from Major John James. The Battle of King's Tree took place on August 27, 1780. The city sustained losses including, Indiantown Presbyterian Church being burned to the ground.

Williamsburg Presbyterian Church was founded in August 1736. The church consisted of three structures. Its founders built the first church in 1738 across from the Williamsburg Cemetery in town; the second building was constructed in 1828 and was across from the Williamsburg Cemetery as well. The third, the current structure of the church located on North Academy Street was built in 1914. The stained glass windows on the roof of the church today were imported from Austria. One of the stained glass windows on the roof was removed in 1989 during a renovation and was placed behind the pulpit of the sanctuary. The first person to be buried in the church cemetery was John Witherspoon(1670–1737), the father of James Witherspoon, builder of Thorntree.

The Kingstree company formed at Williamsburg Presbyterian Church's original churchyard in July 1780. The company was led by Captain Henry Mouzon and later turned into the battalion and then formed a brigade led by Francis Marion against the British.

The Arnette House is one of the three oldest homes in the town and was built in 1840. The home holds significance in the town because the dining room was used as a school for two periods of history during the early years of the home.

Thorntree House is the oldest home in the lowcountry area of South Carolina. The early plantation home was constructed from native materials of South Carolina. James Witherspoon built the home in 1749 when the house was located six miles outside of town near where the Battle of the Lower Bridge took place. Witherspoon was a part of Francis Marion's brigade. After Witherspoon's death, Witherspoon's son inherited the plantation home. The British occupied the home during the revolution when it was at its original location, on the Black River. Gavin Witherspoon was the owner at the time. The house was later moved to its current location in 1969 when it was being restored by the Williamsburg Historical Society and is currently registered by the National Historic Register. The Williamsburg Historical Society moved the house into Kingstree city limits to provide protection from police and fire department.

The Williamsburg County Courthouse is located in the business district of Kingstree on Main Street. The original grounds of where the courthouse stands were the original parade grounds in the town of Kingstree and were used by the militia during the revolution. The courthouse was built in 1823 by Robert Mills, a nationally known architect that hailed from South Carolina. The second level of the courthouse suffered a fire in 1883 but because the walls were 30 inches thick and fireproof, the building was restored. Other changes and additions were added to the courthouse including in parking for horses in 1901, and a third floor in 1954. 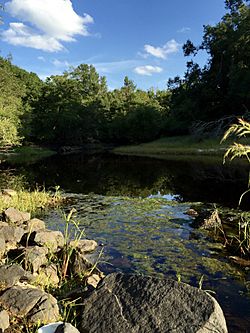 The Black River is a free flowing river that is surrounded by banks of undisturbed land. The river has plant and animal habitats including endangered species. Some of the endangered species include the American chaffseed and the swallow-tailed kite. The black color of the river comes from tannins that come from cypress trees. The river draws sportsmen because of the variety of fish including bream, red breasted sunfish, large-mouth bass, and catfish.

The "Pig Pickin'" Festival is held every fall for all the chefs of Kingstree to compete in a barbecue recipes. The festival draws crowds from all over to test the Williamsburg County vinegar-based barbecue. In 2010, the festival had a record breaking number of contestants. Seventy groups competed with contestants that traveled from other states including North Carolina and Georgia. The area golf course, Swamp Fox Golf Course, sponsors a golf tournament to begin the events every year for the festival. Other events include tennis tournaments, car show, arts and crafts, food venders, live music, and activities for children.

Since 1996, the Williamsburg Hometown Chamber has sponsored "The King's Tree trials" for those in the Kingstree community. The races take place at the McCutcheon training center in the Cedar Swamp area on a weekend in November. Jockeys and their horses are brought in for the event. Horse racing has been taking place in Williamsburg County since before the Revolution. Nine quarter races take place while families and people from the business community chat and eat barbecue.

All content from Kiddle encyclopedia articles (including the article images and facts) can be freely used under Attribution-ShareAlike license, unless stated otherwise. Cite this article:
Kingstree, South Carolina Facts for Kids. Kiddle Encyclopedia.